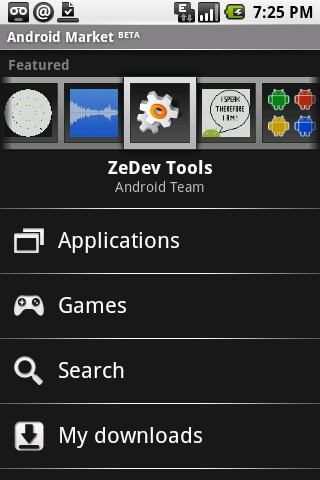 Google have confirmed the Android Market download service, and released screenshots and further details on the system that will allow users of Android-based devices to browse and install software while mobile. A beta version of the service will be included on the first commercially available handsets, that will support free apps, with an update allowing for paid software soon after launch.

That update will also include features such as versioning, multiple device profile support and analytics, among other things. Google are taking a more hands-off approach to app distribution than, say, Apple; developers will merely need to register an account, upload their content and publish it, with no validation from Google themselves. A rating system will be used to weed out lesser titles and, presumably, malware.

“Developers will be able to make their content available on an open service hosted by Google that features a feedback and rating system similar to YouTube. We chose the term “market” rather than “store” because we feel that developers should have an open and unobstructed environment to make their content available” Eric Chu, Android Mobile Platform

Google is suggesting that their “expertise in infrastructure, search and relevance” will help users find the most relevant apps. There’s no word on whether they plan to take a cut of paid-for apps distributed through the Android Market. However by stepping back from checking and approving each application, although perhaps allowing the developer ecosystem to flourish more freely than that of the iPhone, it’s possible that malware and other dangerous apps could more easily find their way onto Android devices.