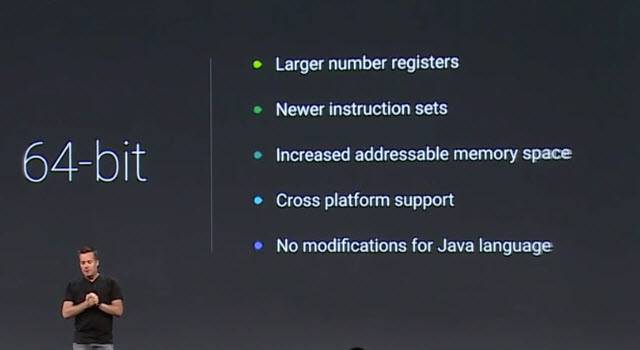 From Google I/O 2014, we were treated to a preview of Android next OS releases, now known popularly as Android L. Android head honcho Sundar Pichai also made it clear that Android 5.0 (or is it Android Lollipop?) will be optimized for 64-bit apps, but as launch date nears (we hope) – there have been few updates regarding Android L 64-bit capability. Thankfully, we have one right now – as Android Dev has announced the availability of an Android L 64-bit emulator for Intel x86 architecture.

This emulator image is specifically for app testing, as developers begin to take advantage of specific features that 64-bit processing can give. Those include increased addressable memory space, a larger number of registers, and new instruction sets for their apps.

Android Dev also announced that apps coded in Java will be able to automatically access these new benefits, while those built with Android NDK will have to make specific changes – namely, the have to compile for 64-bit architectures by including “x86_64” in the build target, or use the catch all code “APP_ABI=all64” in their Application.mk.

This is all good, as developers can now start testing their apps for 64-bit. But we need to address the obvious white elephant here – where is the emulator for ARMv8? This emulator release is specifically for Intel Atom/Bay Trail processors, and not ARM. NVIDIA’s 64-bit Tegra K1 may just be around the corner, and Qualcomm is already pushing their 64-bit capable processors, so Android Dev needs to put out for ARM architectures soon.