As one month ends and another begins, we take another peak at the state of Android on its own turf. Unsurprisingly, we find Jelly Bean devices continuing to rise and Android 4.4 KitKat slowly starting to eat up some space as well.

For the seven days leading up to December 2nd, Android Jelly Bean occupies 54.5 percent of the Android distribution pie. Of course, it helps that “Jelly Bean” actually encompasses three Android releases, from Android 4.1 to 4.3. Of these, Android 4.1 has the biggest share at 37.4 percent, while the relatively recent Android 4.3 only has 4.2 percent. Based on recent device announcements, it seems that manufacturers and vendors are still opting to use Android 4.1 for devices, especially low-end ones. Fortunately, barely anyone is putting Android 2.3 Gingerbread on new devices anymore.

Android’s latest release, 4.4 KitKat, is climbing rather slowly. Considering it’s just a month old, that is to be expected. It will be interesting, however, to observe the growth of this version in the future and how much it will change this pie chart. Android 4.4 is Google’s answer to the version fragmentation problem plaguing the platform and is promised to perform well even on less capable devices. Once adoption kicks off, we’ll hopefully be seeing less and less of older Android versions. 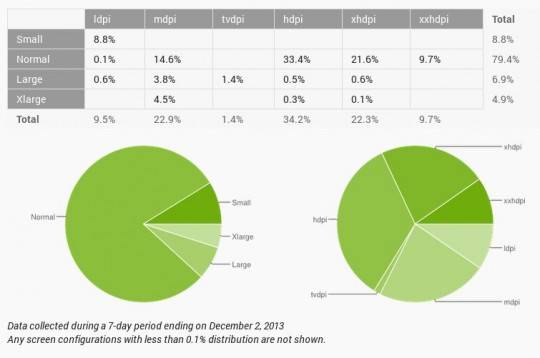 Another source of headache for developers is the fragmentation when it comes to screen sizes and densities. Fortunately, even that seems to be converging on particular configurations. In particular, screens with normal sizes and hdpi densities, such as 480×800 displays, are becoming the favorite of hardware makers and users, making up 33.4 percent of devices.