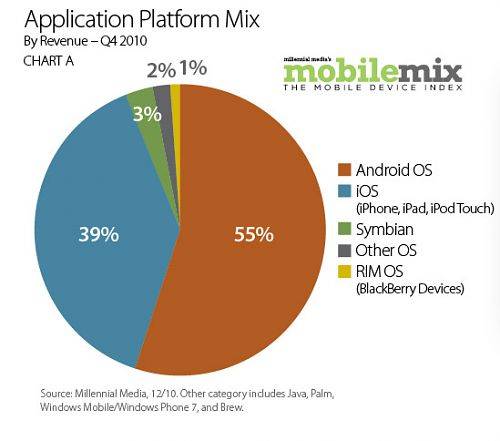 The numbers are in, this time it’s Android’s mobile ad rankings that are making the news. According to Millennial Media, a mobile advertising platform, Android has surpassed Apple in ad revenue by a whopping 16-percent.

This clearly marks Android’s further push to market domination as not only is it the top in revenue for Q4 2010, but it takes the lead in share of all impressions with 46-percent.

Android is in the middle of its growth phase, while Apple is clearly in the mature cycle of its operating system’s life. Seeing a 3,130-percent platform ad request growth in 2010 alone, Android has grown significantly over the last year.

Hopefully, this growth will continue into 2011 with the wide array of Superphones showcased at CES, but as we do not know how much as there is now steep compitition as the iPhone moves away from its AT&T exclusivity.