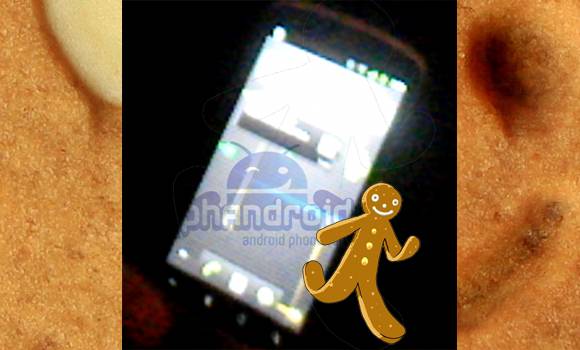 Android Gingerbread, the most tasty version of Android to come out yet. It’s still in development, but the details are peeking through the cracks. Let’s take a taste! First of all, there’s a very possible graphical overhaul. Google’s hired ex-Palm user interface expert Matias Duarte, pointing directly at a lovely new look that’ll blow everyone else out of the water (not that this is going to be the hardest thing to do in the world, you aesthetic sinners, you.) Standard icons have a new simpler look, appearing now to have all come from the same illustrator rather than a gaggle. And then there’s green, so much green!

This blurred as sin photo is all that’s available to the world at the moment, so I added a little gingerbread man there to brighten your blurry blues away. The notification bar’s turned from a milk color to a gray, a color more and more prevalent on the internet in layouts these days, have you noticed? After that, there’s lots of greens, a prominent logo for whichever carrier you’ve purchased this from. The main homescreen is essentially the same, most of the colors moving toward a more prominent green, especially the Browser and Dialer buttons which are no longer gray but a wild lime.

Sources report that a lot of the change will come through the feel of the apps, making them more a part of the OS than a plugged-in bonus. YouTube, for example, will be displayed in a way unlike any other place you’re going to be able to access it, with a full-screen continuous play mode called “Lean Back” which you can also use to view the newly -launched Google TV.

Things are getting bouncy as they’ve been getting on iOS devices and on TouchWiz 3.0 devices when walking up and down lists. Force-fields hit your finger as you reach the end of the line in either direction. Gingerbread overall seems to accelerated, slightly smoother, and in so many tiny ways just a little nicer. Then there’s video chat.

Using the same protocols that power video chat on the desktop version of Google Talk. SIP support will be added so you can receive calls on your Google Voice number over WiFi and cell. This means that even if you don’t have a voice plan, you can use your device as a phone for free just so long as you’re within range of the internet. This feature seems to be Gingerbread-and-higher specific. So what a tasty treat there shall be!