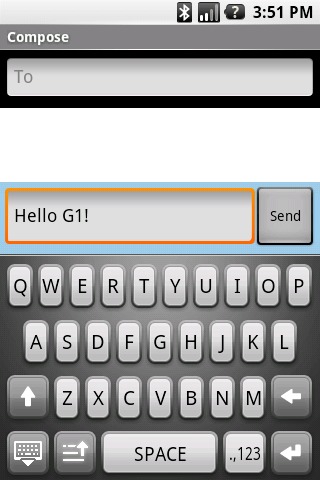 One of the largest complaints that I have noticed is the lack of an on-screen keyboard on the T-Mobile G1. The answer to everyone’s prayers, an on-screen QWERTY keyboard, will be released in Q1 2009.

One-handed text messaging, email and instant messages will finally become a reality thanks to Android roadmap. One question that arises in our heads is, just how fast will you be able to text with an on-screen keyboard? The G1 does not support multitouch and we find that there is a little delay when using the dialer. Still, people who find the need to flip the G1 open each time they type rather annoying will love this shortcut. The site reads:

“At the moment, Android does not support any virtual keyboard, but that may soon
This feature will enable support for input methods other than physical keyboards, for example soft keyboards. IMF will also enable application developers
to provide IME (see below) applications based on the framework.

IME will support soft keyboards, a dictionary of suggestions, and a suggestion algorithm. The Android platform may contain few reference IMEs, and developers
can provide IME applications through the Android Market.”