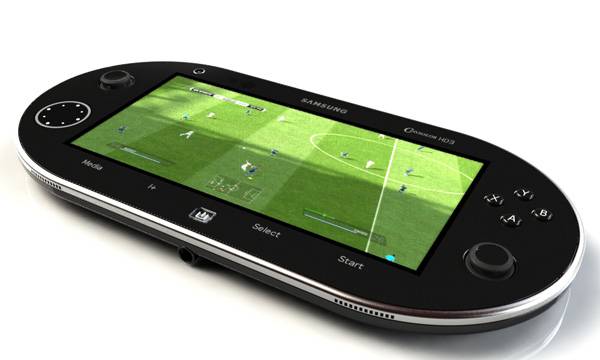 Over at Yanko, there’s a cool design for an Android gaming platform that could go head to head with Sony Ericsson’s Xperia Play. The concept, which is being touted as the Samsung HD3 Console, would employ a 3D galaxy interface with an HD AMOLED multi-touch screen, have Dolby mobile stereo speakers, two analog sticks and a built-in microphone for chat. It also looks to stream live TV via 4G or WiFi, 250GB of internal memory and sport an insane 8MP front camera and 12MP rear shutter. And of course, it would run Android, presumably Gingerbread or above.

Other features include built-in GPS, gyroscope and accelerometer, all the usual stuff. But also Visio gaming, where users can view each other and chat, MISS touch buttons that vibrate when you select and illuminate in low light, and even inductive charging. In fact, the design is TOO packed. Even the editors at Yanko see this more as what they call a “fanboi’s pipe dream about the ultimate gaming machine.”

To be able to put a front facing camera with 8MP resolution, 250GB of internal memory and Dolby stereo speakers, not to mention that HD AMOLED screen would make this unit cost way too much, even subsidized. But one of the cool things about Yanko is that they think outside the box and offer device designs that are basically impossible by today’s standards to produce affordably. And that’s the beauty of design, it doesn’t have to worry about costs, just think stuff up, throw it up and see what sticks. It helps us to imagine, to picture where we want to go next. And that’s never a bad thing.