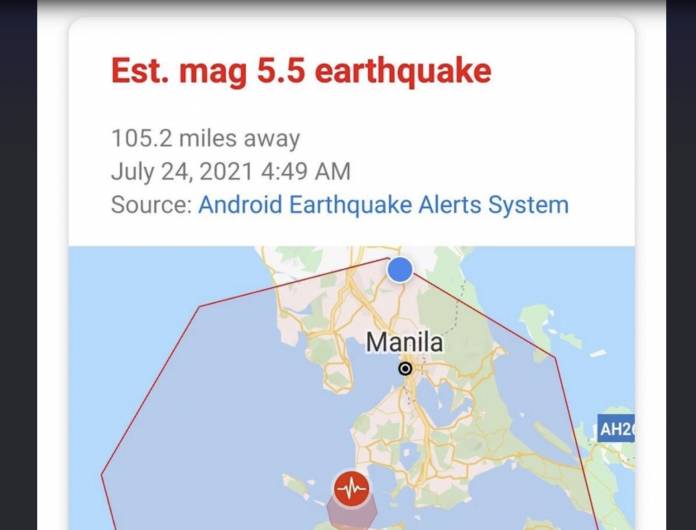 Folks in the Philippines had a rude awakening as a relatively strong earthquake struck them early Sunday morning. But some actually were awakened by their smartphone seconds before the quake because of a notification from their Android device. The Android Earthquake Alert System was rolled out in seven countries recently including the Southeast Asian country and now it has proven effective in giving early warning to users that an earthquake is imminent. This system is set to have a global launch sometime next year.

A Reddit thread reported that several Android users received an alert a few seconds before the magnitude 6.7 earthquake struck which is basically the purpose of this built-in alert system. Google wanted to create the “world’s largest earthquake detection network” using Android smartphone sensors and technology that’s already basically available. And in this case, in the Philippines, it looks like the system is up and running effectively.

The alert/tool is automatically enabled in your Android smartphone and the system uses the device’s accelerometer to detect the initial P-wave. It will then send a city-level location to the earthquake detection server. The reports will be verified before sending a notification that includes a map, magnitude, and even the drop, cover, hold instructions for earthquakes. All of this happens (hopefully) before the possibly destructive S-wave arrives.

People on the Reddit thread shared screenshots of the alerts that they received. People said that seconds after they received it, they indeed felt the earthquake. Some might say that seconds will not be enough to get to safety but at least people will be aware and if they think quick on their feet, they’ll be able to do something. The notification also has other reminders like check gas, avoid damaged buildings, etc.

The earthquake system was announced back in August 2020 and has gone live in a few countries. Over the next year, Google will make it available globally, or at least in places with a wide availability of Android devices. Users can opt out in the settings but why would you, especially if you live in an earthquake-prone area?