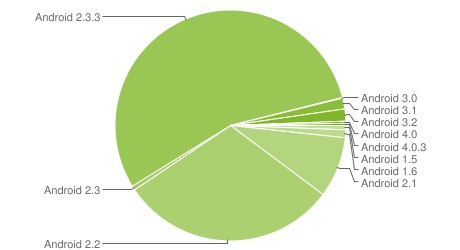 It’s that time again, boys and girls, when the folks at the Android Developer portal release the latest statistics on the division of Android versions across the platform. This month we see a continuation of recent trends, with Gingerbread keeping a steady growth and Honeycomb bumping slightly. But the most exciting statistic is that in December Ice Cream Sandwich made its distribution debut, running on .6% of all Android devices.

Sure, it’s not much, but the statistical gathering ended only yesterday; it’s been just six weeks since the Galaxy Nexus became available in Europe, only about three since it went on sale in the US, and only one phone (the Huawei Honor) has received an official Ice Cream Sandwich update. Honeycomb has 3.3%: still very small, but up nearly 50% from this time last month. Perhaps the Kindle Fire and Nook Tablet didn’t get all those holiday sales. Gingerbread is still the dominant Android version at 55.5%, up about 10% from last month.

Expect Ice Cream Sandwich to gain much faster in the Android world, for two reasons: one, it’s designed to run on smartphones as well as tablet,s so the number of applicable devices is greater by an order of magnitude. Two, unlike Honeycomb, Google released the source code for Ice Cream Sandwich almost immediately, so cheaper tablets that don’t have Google’s approval are already starting to hit the market. This time next year, don’t be surprised if Ice Cream Sandwich is sitting at 55% distribution – while we’re trying out Jelly Bean.