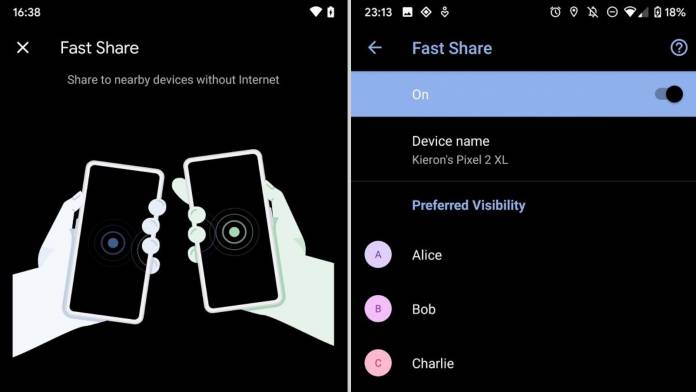 One of the things that Android users have probably been wishing for years is to have a file-sharing service that’s similar to Apple’s AirDrop. We had something close to it with Android Beam but somehow that was something Google chose to do away with in the upcoming Android Q update. Now it looks like they’re set to launch a new and hopefully much better service called Fast Share and instead of just relying on near-field communication, you get to share over Bluetooth and direct Wi-Fi connection.

According to the folks over at XDA Developers, they were able to access it and shared some screenshots of what it will look like. What is noticeable at first is that it will let you “share to nearby devices without Internet”. Unlike the previous Android Beam which used NFC, this time around you need Bluetooth to initiate a handshake between devices then uses direct Wi-Fi connection to transfer the files you want. This should make it work faster than Android Beam, especially in transferring large files.

If you regularly transfer between specific devices, you can also give it “Preferred Visibility” status so other devices will always see yours if you’re within range, even if you’re currently not using Fast Share. When sending files, you can select one or more files then choose “Fast Share” when the share sheet menu appears. Afterward, you choose which device to send to once the list of devices appears in the scanning menu.

Currently, it shows generic share targets for a Chromebook, Google Pixel 3, an iPhone, and a smartwatch but none yet for Chrome OS and Wear OS devices. Hopefully, this is something they will add before launch. But they are indeed supporting sending and receiving files to and from Android devices if Google Play Services is installed but as to what specific Android OS version is included is unknown at this point.

There is no indication yet as to when Fast Share will be available so we’ll keep you posted. What’s important is that we may now finally have an AirDrop competitor and an easier way to quickly transfer files between devices.