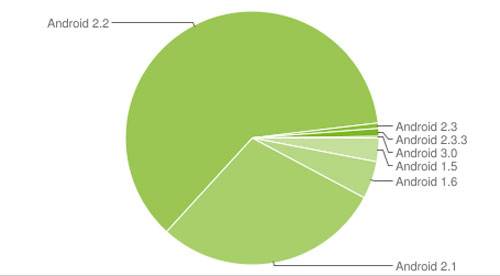 I am sure that it helps developers of Android apps immensely to know what the most common version of the OS is when they are designing their games and apps. Android Developers has offered up just such details for devs to gander at. The new details offer up the current distribution noting the percentage of a specific version installed and historical distribution levels.

The idea of the info is to offer devs an idea of how many devices their apps will be compatible with. The data in the first chart was collected over two weeks ending on March 15. According to the info the most common version of Android right now is 2.2 with 61.3% of devices on the market running 2.2. The next most common is 2.1 with 29% of devices using that version.