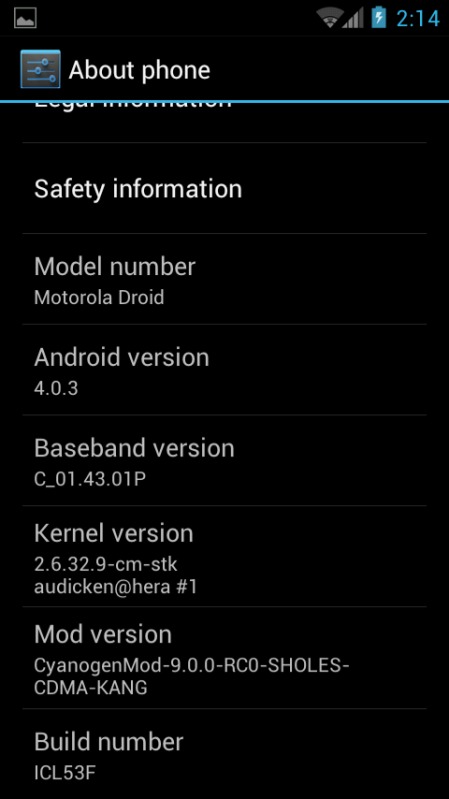 In my tenure here at Android Community, I haven’t been shy about my love for Dolphin Browser HD. It’s one of those apps that I immediately download on every phone and tablet I review, simply because I’ve grown to depend on its features and expandability. But after a week with the Galaxy Nexus and Ice Cream Sandwich, I’ve found to my amazement that I just don’t need it any more. The default browser that comes with Android 4.0 incorporates all of the features that made Dolphin a must-have, and it’s faster and more stable to boot.

There are two primary advantages to Dolphin that kept me coming back: built-in fullscreen support and a quick desktop mode (via the add-on Desktop Toggle). Both of these features can be found within the ICS browser’s settings menu, and unlike Honeycomb, fullscreen browsing doesn’t require the somewhat awkward quick controls. Syncing bookmarks from your desktop Chrome browser is easier than any other implementation, including Dolphin, Firefox and Opera Mobile. Maybe that’s cheating somewhat, since Android is Google’s software through and through, but at the end of the day it’s a very welcome addition.

The browser interface has received a major overhaul as well, shrinking Honeycomb’s features down to smartphone size. Instead of a horizontal bar, tabs are kept in a WebOS-style stack, similar to the app switch button in the virtual navigation bar. Switching is fast and intuitive, and quickly closing multiple apps is simple thanks to the swipe motion. To see a desktop version of any site, simply tap the menu button in the address bar and then tap “request desktop site”. You can even save entire pages for viewing later. Browser performance is noticeably speedier than previous Android versions, both in load times and navigation. 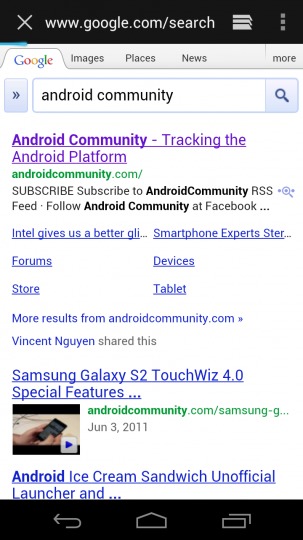 Maybe it isn’t fair to highlight an app that’s included in Android, and won’t be accessible to most users for months. But trust me: the Ice Cream Sandwich browser will be worth the wait. It’s still a little light on expandability, which is where third-party browsers will have it beat with extensions, plugins and themes. But even power users can depend upon the built-in ICS browser for just about everything you’d want from the mobile web, a statement that simply isn’t true for Gingerbread. Hopefully  Ice Cream Sandwich will find its way onto more phones soon, and if it doesn’t, it’s worth trying an Android 4.0 ROM if you’ve got the inclination.