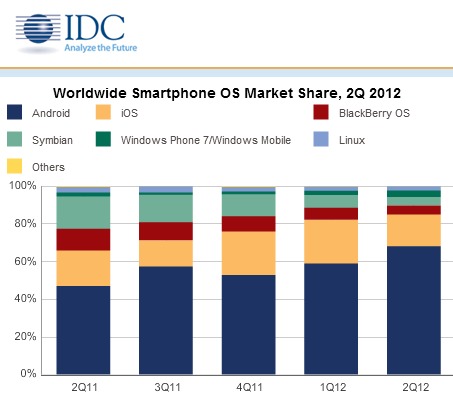 The International Data Corporation has released its Quarterly Mobile Phone Tracker results for Q2 2012, and things are looking great for the little green robot. IDC says that in all, 154 million smartphones were shipped in quarter 2 alone, and of those, 104.8 million were Android handsets. That gives Android a whopping 68.1% market share for quarter 2, and it appears that we have Samsung to thank for that.

That’s because 44% of all Android smartphones shipped in Q2 were manufactured by Samsung. True, that isn’t quite a majority percentage, but 44% is not a small portion by any means. In fact, that number is large enough for Samsung to be able to claim that it sold more smartphones than its seven biggest Android competitors combined. Obviously, the new Galaxy-branded devices introduced recently contributed greatly to this boost for Samsung, so don’t expect the company to lay off the Galaxy line anytime soon.

Android’s success is compared to the number of smartphones Apple managed to ship in quarter 2, which comes in at 26 million. That’s 16.9% market share for iOS, and even though Apple saw double-digit growth in the quarter, IDC points out that it isn’t managing to keep up with the overall market. This means that we may see Apple begin to slip before long, but it doesn’t have much to worry about at the moment – iOS and Android make up 85% of the smartphone market, and Apple’s numbers for the quarter were good enough to put it in a solid (if not distant) second place.

As is usually the case, Android’s growth in the quarter comes at the expense of BlackBerry and Symbian. Both were very popular mobile operating systems at one time, but in Q2, both slipped below 5% market share. Indeed, with BlackBerry sitting at 4.8% and Symbian sitting at 4.4%, things aren’t looking so good for either of them, and if Android keeps growing, they’re likely to lose even more market share.

So, Android is looking great and iOS is still pretty healthy, but everyone else is suffering at the end of quarter 2. Android is likely to keep on growing as time goes on and more and more people begin making the switch to smartphones, so keep it tuned here to Android Community for more news about the robot’s climb to the top!