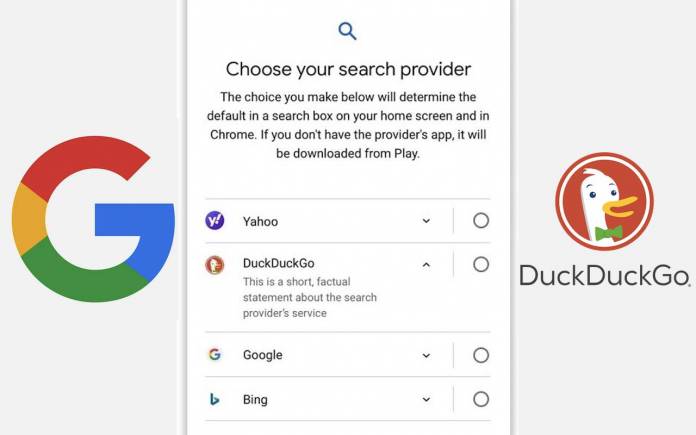 We haven’t discussed anything about DuckDuckGo recently but the last one was back in January when Google offered it as an alternative in “search engine ballot”. It’s been over a decade since the search engine was launched but it was only in 2013 when its mobile app sneaked into the Play Store. Through the years, it has improved and even expanded privacy protection beyond your search queries. Today, we’re learning about some important changes that will bring up search results differently.

It’s been a year since Google announced that a choice screen will be implemented for general search providers on all new Android devices that will be sold in Europe. Google is usually a pre-installed mobile app on Android-powered phones and tablets in the European Economic Area (EEA). This move was made after the European Commission fined Google.

Google consulted with the European Commission and so this choice screen design has been developed. What will happen is during the initial setup of a device, a choice screen will show up. Google and other multiple search providers will be listed so the device owner can choose.

It won’t be just Google. A user can and must select one search provider. This way, a user can also do the following as per the Android team.

A user can choose to remove the search box so it won’t be shown in the future. This change will be implemented on new mobile devices shipped to and sold in the EEA region on or after March 1, 2020. This means any new phone or tablet now available in the area.

Search providers were required to bid to be included in the list. Google has set eligibility criteria for participating in the choice screen: General search provider, Localization, App in Google Play, and Delivery of technical assets.

The Choice Screen is said to show a maximum of four search providers. Winners have already been named per country. Check out the list below:

The top search engine Google is an option in all countries. Search providers who won the auction can still withdraw from the countries. It also noted that the list may still change. Don’t be surprised but the search preference menu has recently eliminated DuckDuckGo from some countries as per DuckDuckGo.