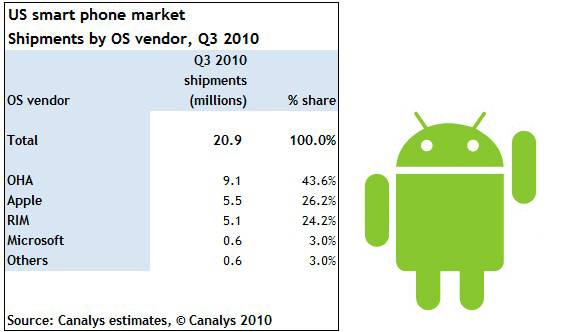 Android has taken the top-spot for most popular smartphone OS, according to analysts Canalys, though the fact that it is a collaborative result from multiple manufacturers means that Apple’s iPhone is still the most popular US smartphone.  According to Canalys’ figures, Android device growth increased by 1,309-percent year-on-year, from 1.4 million in Q3 2009 to more than 20.0 million units in Q3 2010.

The iPhone, meanwhile, holds 26.2-percent of the market share, pushing RIM into second place with 24.2-percent.  “‘Android has been well received by the market and in some geographies it is becoming a sought-after consumer brand” claims analyst Pete Cunningham, “It has rapidly become the platform to watch, and its growing volumes will help to entice developers, ensuring consumers have access to an increasingly rich and vibrant mobile content and application ecosystem.”