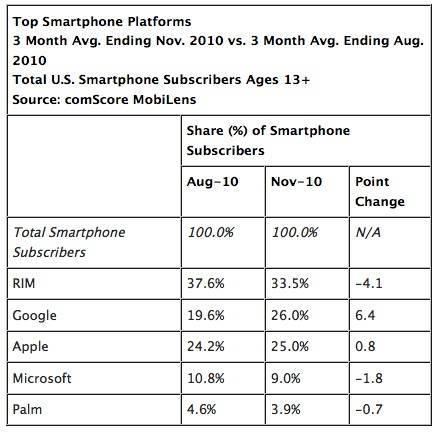 The numbers are in and for the first time the Android OS and its universe of devices has beat the iPhone in total number of users. The stats come courtesy of comScore MobiLens. According to the company, Android had 26% of users for the month of November.

During the same month, the iPhone had 25% of users. RIM was still at the top of the list with 33.5% of all users, but their numbers are declining with a 4.1 point change from August of 2010.

While RIM is seeing user numbers decline, the Android OS has seen numbers grow by 6.4 points since August. Apple’s growth is much slower than Android at 0.8 point. Microsoft has 9% of the users and Palm had 3.9% for November.