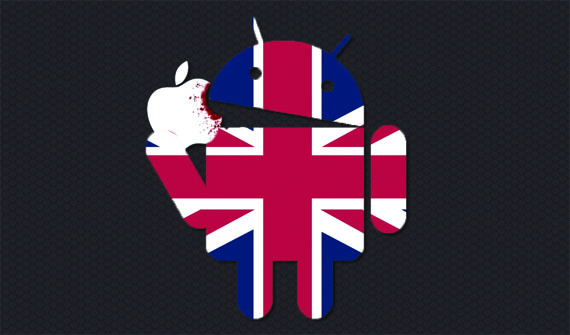 Brits like their Android. In the United Kingdom, Android phones are outselling the iPhone by a factor of two to one, according to analytical firm Kantar Worldpanel Comtech. Android phones outsold all iPhone models for July, August and September. Smartphones themselves are booming in The UK, with 70% of all mobile sales being smartphones of one kind or another.

49.9 percent of all the smartphones sold in the territory over the 12 week period were running Android, compared to just an 18.5 percent share for the iPhone. The Blackberry platform hasn’t fallen from grace so dramatically in the UK, and has 22.5 percent of the market. According to Kantar Worldpanel Comtech’s estimate, 43.8 percent of the UK population owns a smartphone, meaning that almost a full quarter of the population owns an Android phone.

Caveats: this data doesn’t include the iPhone 4S, which will certainly spike the numbers in iOS’s favor for a few weeks. It also doesn’t represent an accurate picture of the mobile OS market as a whole ,as it doesn’t include iPods or iPads, or the small number of Android tablets out there. Apple is still kicking backside when it comes to mobile browsing – Safari has captured an impressive 62.2% of all mobile browsing, incorporating all iPhone, iPod and iPad models in the UK and elsewhere. Also, Android manufacturers typically report in terms of units shipped, not sold – Apple has an advantage there since a lot of their sales are direct to consumers.

Still, any way you slice it, Android is continuing to dominate in the smartphone arena. Here’s hoping that Ice Cream Sandwich will continue the trend when the Galaxy Nexus lands at the White Cliffs of Dover on November 17th.