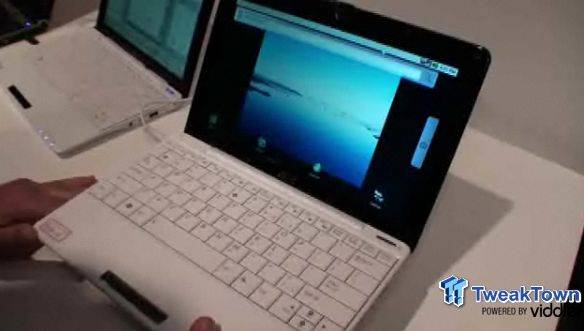 Computex 2009 is taking place this week, and Qualcomm have kicked things off with a netbook running Android.  Actually, this is a Smartbook, not a netbook, and rather than using the typical Atom processor it’s based on Qualcomm’s 1GHz Snapdragon chipset.

That means the Smartbook – which is thinner than the ASUS Eee PC 1008HA – can be fanless and offer super-long runtimes and standby, despite supporting 720p video playback.  Various prototypes of Smartbook designs were shown; you can see more here.

According to Qualcomm, the first Smartbooks – which can also use a new 1.3GHz chipset, and an existing 1.5GHz dual-core version – will hit the shelves by the end of 2009.  No word on whether Android will be among the OSes offered, but given its native support for 3G WWAN, GPS and other wireless connectivity, and the fact that Qualcomm’s chipsets offer all of those, it seems a likely choice for at least some manufacturers.