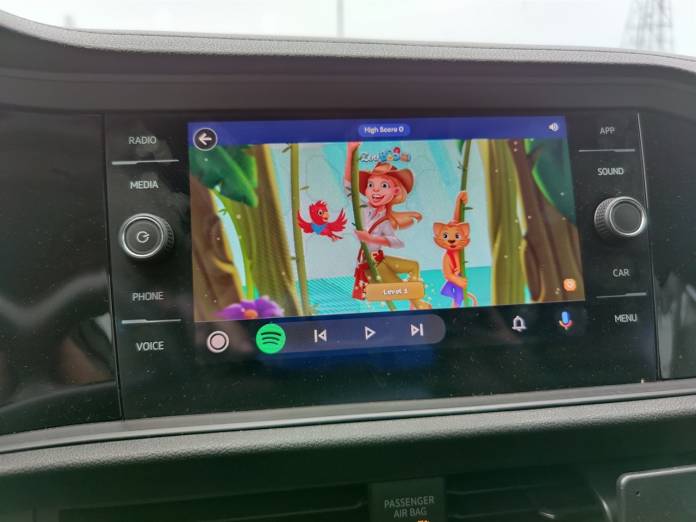 You probably don’t associate HTML5 games with cars’ infotainment systems but apparently, Google is working on bringing that to Android Auto. Strings have been spotted in the latest APK for the app that will let you play such games on the dashboard of your car. But don’t worry, Google is not encouraging drivers to play while driving on the open road. These games cannot be launched unless the user is parked, unlike the voice-activated games that currently can be played through Google Assistant.

In an APK Teardown, XDA Developers were able to manually surface something called GearSnacks in the app list for Android Auto. It was spotted by Reddit users and apparently has a “multitude of games” and that it will let you play them on your car’s dashboard if you have Android Auto installed there. They were also able to find multiple references to it in the latest Android Auto update and it ties in directly with GameSnacks.

For those unfamiliar with it, GameSnacks is actually an existing HTML5 gaming platform that came out of Area 120, Google’s experimental lab. It creates bite-sized HTML5 games that you can play from any web-capable device, whether it’s touch, keyboard, or mouse input. You can play games on your device through the GameSnacks website. Later on, Google began integrating the games into Google products like Chrome, Google Pay, Google Assistant, and Google Discover.

The Android Auto code shows around 8 games that are being optimized for Android Auto:  Zoo Boom, Onet Connect Classic, Cannonballs 3D, Pin the UFO, 2048 Giant, Find 500 Differences, Unblock That, and Bubble Woods. Some users aren’t seeing all of the games yet so it means they’re still being prepared and optimized for the screen. A string also indicates that the games will only be playable on touchscreen-enabled head units.

And lest you think that it’s dangerous for Google to be adding games to Android Auto, GearSnacks cannot be launched unless it is detected that the vehicle is parked. We may hear of an official announcement about GearSnacks soon but for now, it’s still under development.