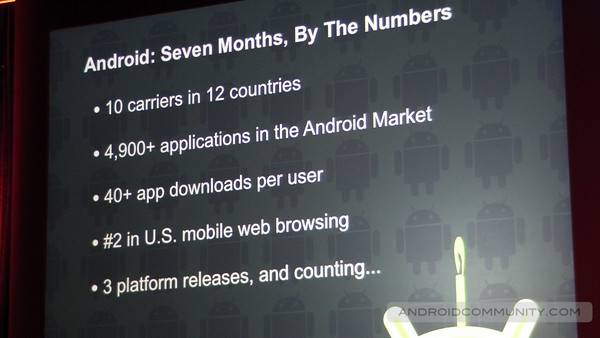 Vincent is live at Google I/O right now, and he’s bringing us some great news on the history of Android and hopefully some new news on where it’s headed.

We have some facts and figures about Android:

If you can’t read the picture (really?) we have Android on 10 carriers in 12 countries, with 4,900 applications, and each user downloaded 40+ applications per device. It is #2 in the U.S. mobile web browsing stats, and there’s some more news coming.

New features include handwriting recognition, and we have what looks like the new Samsung device on stage. We’re going to bring you updates as the come, and also video!

Update: It seems that Google’s Android 2.0 “Donut” will also have Text-to-Speech functions as well as Universal search.

Update 2: Check out the video demo of the new features here.