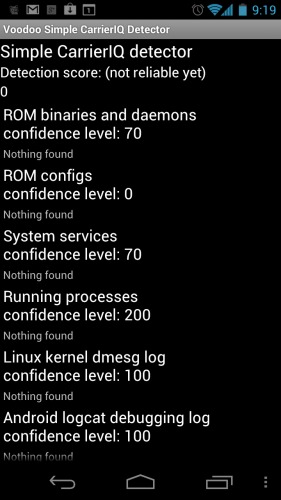 If you are one of the Android using masses that worries Carrier IQ is tracking what you do on your smartphone you will want this new app. The app has launched and is called Voodoo Carrier IQ Detector. The app does exactly what the name implies and will run and figure out if your smartphone has the Carrier IQ software running on it.

Apparently right now there are a few caveats to the app, namely it admits in the app that the results are not all that reliable yet. The reason reliability isn’t there is that the app is only just released and apparently only partially finished. The image you see here is taken from a Galaxy Nexus we have in our possession.

Google has said that Carrier IQ isn’t on the Nexus and while the reliability of the app is suspect right now, it shows no indication of the maligned software installed. If you are the developer sort, the source code for this app has been made open source so you can help refine and improve the app.