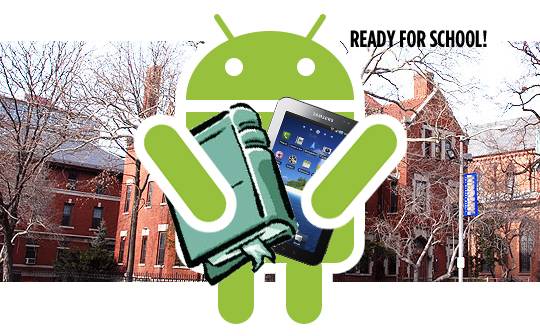 In a press release sent out today by NJIT, we’ve learned that there’s what must be the most amazing class ever offered in the history of a University ever. The Android Operating System Application Development Course starts January 18, 2011, and is open to the public. It’ll give you all the skills and tools you’re going to certainly need to design and implement software using the Android 2.2 environment (so if you’re in 2.3 or higher you’re out of luck?) and all it costs is $1,050. Register by January 17th!

Ok I was kidding – the JRR Tolkien class that was offered at the state college I went to before design college was the best class ever, of all time, ever. But this class is real, and it is supposed to be “an excellent way to get a start on developing applications for a tablet operating system.” Will you be grabbing your pencils and books and heading on over to New Jersey for a bit of the ol’ noggin cramming?

Take a peek at the full press release below:

The Android Operating System Application Development Course, which starts Jan. 18, 2011, is open to the public and will offer the skills and tools needed for designing and implementing software using the Android 2.2 environment. The cost is $1,050: register by Jan. 17, 2010 athttp://cpe-njit.mobi/ or call 800-624-9850.

“Consider this course an excellent way to get a start on developing applications for a tablet operating system,” said instructor Tim Kellers. During the past year, Android systems have demonstrated a 35 percent increase in market share. “As new smart phones and tablet devices appear, there is a growing competitive opportunity to design and market commercial Android-based apps,” added Kellers.

The Android market is the clearing house for user-designed apps, offering developers a fast and convenient way to be paid for their distributed software. The Android market already has upwards of 100,000 apps available for purchase or free download. Within two years, the projected demand for Android-based application software is expected to exceed the capacity of Apple’s highly successful AppStore. The combined annual revenues paid to developers from both platforms are annually expected to exceed $3 billion.

NJIT will award three continuing education units (CEUs) upon the successful completion of the course. Study topics will include getting started, Android controls using XML, table layout in Android, interface themes, creating background services and using the WebKit. More topics include user interfaces, programming services and investigating multi-threading.  Each student will design their own final project application, a culmination of performed tasks and assignments included in each module.

To get started, you’ll need a dial-up or broad-band Internet connection in addition to a computer capable (or higher) of running the 2.2 Android Software Development Kit plus a supported operating system.  Such systems include Windows XP (32-bit), Vista (32- or 64-bit), or Windows 7 (32- or 64-bit); Mac OS X 10.5.8 or later (x86 only);  Linux (tested on Linux Ubuntu Hardy Heron);  the Eclipse development environment.

For further information on the course and syllabus, you may wish to click here.