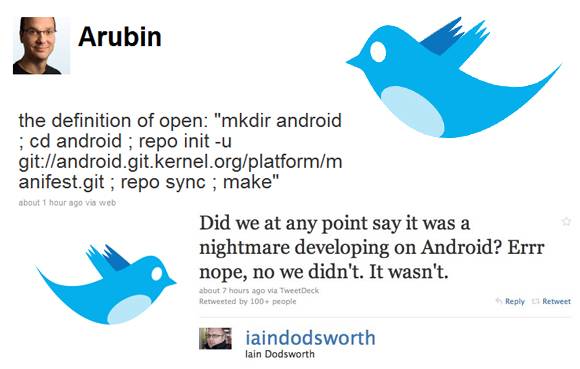 As you may have some knowledge of if you were listening to the Apple earnings call yesterday, Steve Jobs himself let himself be heard on more than one subject, with some choice words for brands such as Android and Tweetdeck. Now there’s a bit of reply on the part of Andy Rubin (father of Android), and Iain Dodsworth (CEO of TweetDeck) through their Twitter accounts. Both of them aren’t exactly pleased with situation, but both seem to have kept their witty humor intact for the jab back.

During the talk yesterday, Jobs stated such things as TweetDeck having to “contend with more than a hundred different versions of Android” and that it was “a daunting challenge.” To which Dodsworth, as you can see, simply says, “Did we at any point say it was a nightmare developing on Android? Errr nope, no we didn’t. It wasn’t” Maybe the lines got crossed somewhere in that exchange.

Then there’s Rubin, who had to reply to Jobs comment: “We are very committed to the integrated approach, no matter how many times Google characterizes it as closed, and we believe that it will triumph over the fragmented approach, no matter how any times Google characterizes it as open.” Rubin replies in a much more subtle way: with a line of code, in his own way, explaining what “open” means. The code, in fact, when entered into Terminal, does thus: creates a folder named “android”, changes to that folder, initializes the “repo” program with the Android source host, downloads the source, and compiles Android. Like, open, man, open.