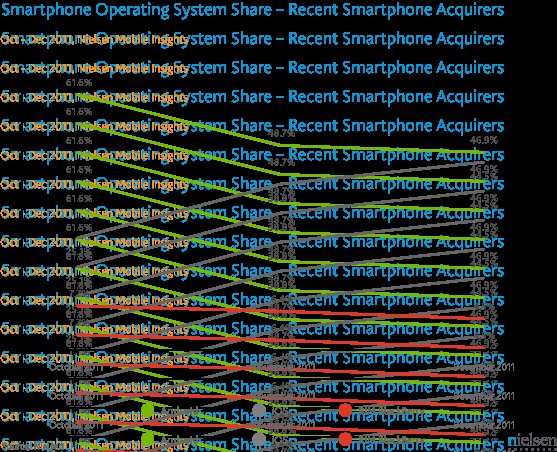 While Android’s rise to the top of the smartphone world has been nothing short of meteoric, it looks like the gravy train slowed somewhat at the tail end of 2011. Despite high-profile phone releases like the Motorola DROID RAZR and the Galaxy Nexus, not to mention a wider and wider selection of Android devices across all price points, Android adoption by new users slowed considerably according to Nielsen. While 62% of first-time smartphone buyers chose Android in October, by December only 47% did.

What caused this drop in enthusiasm? Without a doubt, it was Apple’s release of the iPhone 4S on October 14th. Though Android presents cutting-edge hardware from various manufacturers basically year-round, Apple fans get only one phone release a year, and 2011’s iPhone 4S was off the summer release schedule by several months. Though the 4S hardware is a modest update at best, the addition of a new US carrier, support for HSPA+ (late to the party, as usual) and Siri all made for a considerable showing for late 2011. 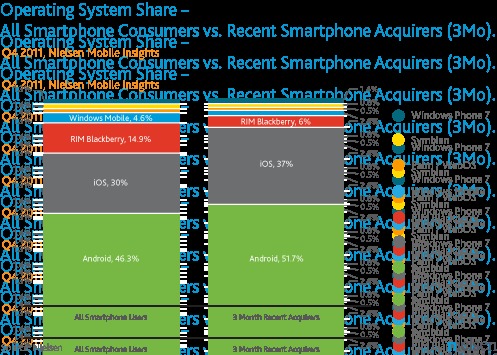 The Nielsen numbers don’t reflect total sales or marketshare, where Android soundly beats iOS in every market. In places like the UK and most of Asia, Android still outsells all iPhone models nearly two to one. Both platforms continue to grow in both total numbers and smartphone marketshare as RIM’s Blackkberry and Windows Phone shrink. That said, with Android and iOS’ combined smartphone share reaching towards 85%, one wonders where the saturation point is – soon enough, it’ll be a true duopoly. Then both operating systems will have no one but each other to take users from.