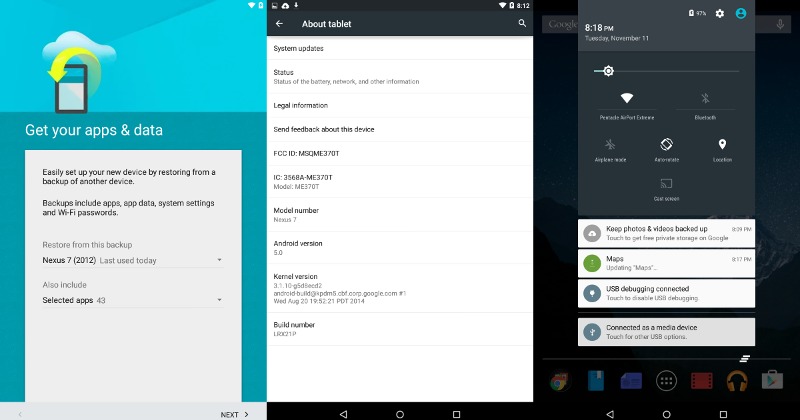 The new Nexus devices are out, well except for the Nexus 6, and with them come Android Lollipop. Naturally, we expect that Google’s previous Nexus devices will be the ones to get the update before anyone else. What we did not expect, however, is that the older 2012 model of the Nexus 7 would actually be the first to get it. Well, at least unofficially via this leaked flashable image that can be downloaded from Google’s servers.

Considering that Nexus devices have an implicit promise of Android updates for two years since launch, it isn’t surprising that the Nexus 7 would get Android 5.0. However, that was still a bit uncertain until Google officially confirmed it to be so. But they say actions speak louder than words, and no action could be louder than an actual downloadable and installable factory image.

A few caveats though. There is a reported signature mismatch with the bootloader image that ships with the firmware. However, that can be skipped if necessary. Of course, you need to have your bootloader unlocked first before you can proceed with any sort of flashing. This is also just the factory image and doesn’t include the binaries for drivers that usually come with official releases, so not everything might work out of the box after you flash it. And yes, flashing will wipe your system, so be mindful of that when you start the process.

Still interested? Hit the download link below to get the image for the “nakasi” (WiFi-only) version of the 2012 Nexus 7.