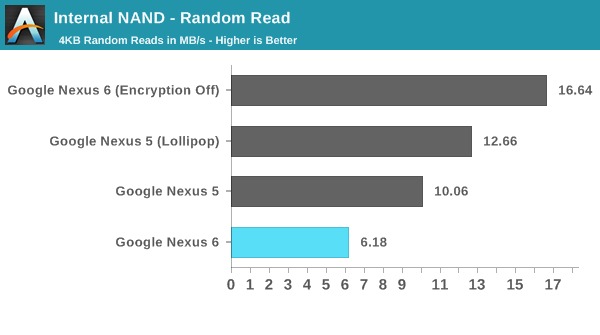 While the US government is trying to convince tech companies and the media that encrypted devices are bad news because they can protect criminals, there might actually be a more technical reason to be wary of this new practice, at least under certain circumstances. Popular tech site AnandTech has just released results of their storage performance benchmarks, revealing a drastic drop in read and write performance on devices running Android Lollipop. The culprit? Full Device Encryption that is enforced in new devices running that version of Android.

Android has actually had storage encryption features going way back, but it is only in Android 5.0 and only in new devices that Google has flipped the switch on by default. The purpose is to combat the recent spate of spying as well as to deter theft, but AnandTech argues it might all be for naught and for little gain. Considering the encryption key is the lockscreen passcode that a lot of users do not set, the security benefits might just be nullified and yet users still get burdened by the slower storage performance.

According to the site, the technical reason for this peformance hit is that, unlike SSD storage, the eMMC technology used in smartphones do not have a hardware encryption system nor do they support encryption/decryption processes without performance penalties. The benchmarks shown here test the Nexus 6, which comes with Android Lollipop out of the box, and the Nexus 5. In the case of the Nexus 6, AnandTech was provided with a variant of the smartphone that doesn’t have Full Disk Encryption enabled. The Nexus 5, on the other hand, doesn’t automatically turn on encryption when upgrading from KitKat to Lollipop so the feature has to be turned on explicitly. 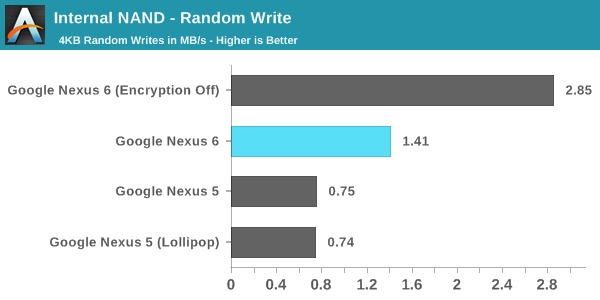 The hardest part to swallow for those who want to bail out of this new arrangement is that, at least for now, there is no simple way to disable encryption at all. In Android 4.4 and lower, all users need to do is to enable or disable an option but Android 5.0 offers no such control. Not all is lost, however, as bbedward from XDA came up with a solution, which practically involves flashing the Nexus 6 clean and starting from scratch. New Nexus 6 owners who are just starting with their smartphone might want to look into this option if their device feels sluggish. Hopefully, Google will be able to come up with a better solution that won’t compromise security and privacy but won’t punish users for it as well.