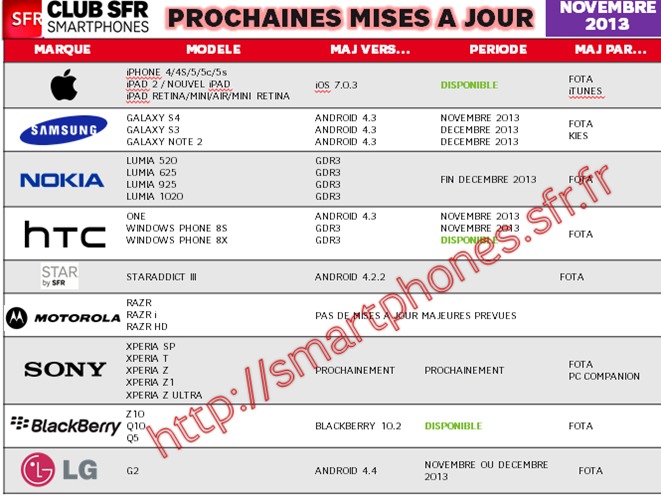 While a number of smartphone manufacturers have ridden on the Android 4.4 release frenzy and announced or teased their upcoming update schedule, LG has so far kept mum. But while the Korean manufacturer isn’t saying a word, French carrier SFR has spilled the beans and revealed that the LG G2 will be getting its Android 4.4 update around December.

Google unveiled the latest iteration of the Android mobile platform last week after a long series of rumors and speculation on its release date. Android 4.4 represents an important milestone in the history of the OS as Google seeks to cement its hold on the mobile device market. Not only does the latest Android version bring in a revamped look and feel, it also tries to resolve Android fragmentation by creating a solid base that can be used even by less capable devices. You can read up more on the events and news surrounding Google hottest new products on our Android 4.4 and Nexus 5 tag portals.

Various manufacturers have been quick to announce their support for the new Android version. Somewhat ironically, LG, who manufactured the reference Nexus 5 smartphone that was announced together with Android 4.4, has so far kept silent about when its flagship smartphone will receive an update. But thanks to a timetable that shows the update schedule for various devices from SFR, we’re getting a clue as to when, which the carrier puts down as November or December 2013.

This schedule, however, most likely applies to LG G2 units sold from SFR, with no definite indication when it will take place for other carriers, much less those sold without contracts. But if this schedule pans out, that should probably happen around that same time period as well.

VIA: Blog of Mobile!!