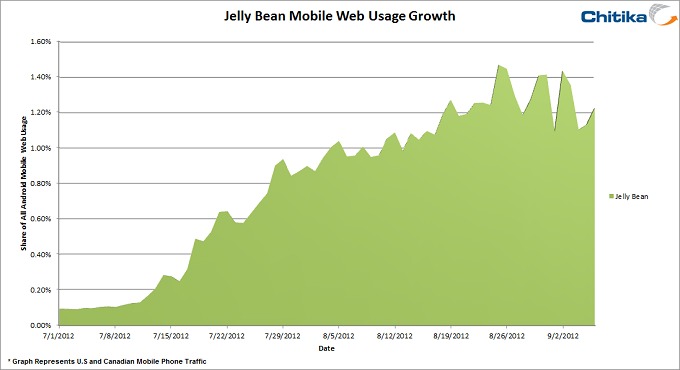 Since it’s announcement two months ago, Jelly Bean has seen a spike in its users by a whopping 1,500%. Advertising network and research firm Chitika compiled millions and millions of mobile ad impressions from within its network and calculated that Jelly Bean’s market share was at 0.87% at the end of July. In one month’s time, it shot up to 1.47%.

Then again, Jelly Bean early adoption rates are a tad higher than Ice Cream Sandwich’s rates — it took Ice Cream Sandwich three months to reach 1.54% market share. So Jelly Bean is already off to a good start. However, we’ll have to wait and see what these numbers look like a few months from now, and whether or not manufacturers will jump on the Jelly Bean train in a timely manner.