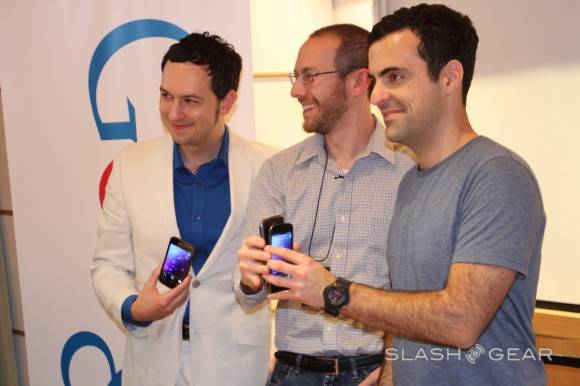 I’m sure many of you readers were following along during the live broadcast of the Galaxy Nexus and Ice Cream Sandwich just as we were, but most likely you all had a few additional questions and concerns. While we weren’t able to ask them all, or everything we wanted, our own Vincent Nguyen was live in Hong Kong to ask as many questions as possible along with a few others. Below are a few quotes from the Q and A session from some of the main Android authorities that were standing by during the Samsung Galaxy Nexus unveiling.

While a sit down with Andy Rubin wasn’t quite possible, we were able to hear from Gabe Cohen, Product manager for Android’s Gmail, Hugo Barra Managing Director for Android, and Matias Duarte, Head director of the Android user experience. Below are a few cut outs from the SlashGear Q and A that we found interesting but you’ll want to hit that source link up for the full session.

Vincent Nguyen: I was wondering, when you did the face recognition – is there an alternate means to get into the device incase it doesn’t work?

Matias Duarte: Yes of course, you can either use a pin (code) or a pattern (much like previous versions of Android). And sometimes if the lighting is too strong, there’s backlighting, or you’re too dark, of course the camera can’t pick up a good enough image – so sometimes have to use that backup.

Vincent Nguyen: Will that be extended to just unlocking, or can you unlock let’s say Dropbox or other apps where it does require a pin or –

Matias Duarte: The feature right now is just for unlocking the phone.

Vincent Nguyen: For the instant voice input [real-time speech], is that still dependent on the carrier quality? Or is there a local file-save so that it starts to learn your usage?

Hugo Barra: Real-time speech is over a data-link so you certainly get better latency over a better data connection, but that’s the only impact I can think of that’s related to the carrier.

Vincent Nguyen: But is there anything saved locally, or is everything – is there a profile of how you use it?

Vincent Nguyen: So there’s no customization at all to the voice input?

— The many other 3rd party publishers also asking questions will be marked by a “Q” except for those by Vincent.

Q: How many languages do you support for voice recognition?

Hugo Barra: Oh man, I don’t have the exact number for the large number but it’s already over 20 languages.

Q: Does that include Chinese?

This next set of questions should answer many readers concerns regarding Android 4.0 Ice Cream Sandwich updates and if they’ll see updates for their device. Sadly this is largely up to carriers and manufacturers, but according to Google any phone running 2.3 Gingerbread should be capable, and therefor deserves to be updated.

Q: I wonder if Android 4.0 will have a minimum hardware requirement – like Android 3.0 does?

Hugo Barra: No specific ones come to mind.

Q: To your estimation, how many Android 2.3 handsets can be upgraded to Android 4.0?

Gabe Cohen: We’re currently in the process of releasing Ice Cream Sandwich for Nexus S as well it should work for any 2.3 device.

Hugo Barra: When we design new versions of the Android operating system we optimize them for the new generation of devices. So we expect that everything will work back to certainly MOST Gingerbread devices, but we certainly designed with future devices in mind first and foremost.

Gabe Cohen: And some of the features you saw are specific to the Galaxy Nexus like the camera.

Matias Duarte: Yeah we think this is the best Android keyboard ever, and we think its as good as any other software keyboard out there.

Vincent Nguyen: SWYPE is becoming – the technology of “swiping” has been becoming popular and other companies are getting sold for a whole bunch of money; was it a conscious decision for Google just to leave that feature out?

Vincent Nguyen: Yeah the ability to just swipe on your keyboard.

Hugo Barra: There are, Idunno, probably about a dozen gesture keyboard available on the Android Market…

Vincent Nguyen: Yeah there are but then I won’t get this whole new keyboard that Google just put out – I’d like to have the best of both worlds.

Matias Duarte: One of the features we actually rolled out in Honeycomb and now with the integration in Ice Cream Sandwich is bringing dynamic keyboard switching in the OS so you can actually install both and have both at the same time.

Vincent Nguyen: I’ve done that and it’s terrible. I just want one keyboard and be happy with it.

Matias Duarte: Yeah, we’ve changed the way that you switch, so you should try it, hopefully it’s not as terrible.

Vincent Nguyen: You didn’t demonstrate it on-stage so could you elaborate how you would switch?

Matias Duarte: It’s always available, on tablets we have the switch controller right there so you just tap to switch between them – on phones you just pull down that notification shade, again, and you can use that to switch between keyboards.

Now I don’t want to spoil all the fun that Vincent and others had here, but we have tons more questions recorded and you can read plenty more where this came from at SlashGear.com. With details and responses from Android being open source, custom UI’s like HTC Sense on Honeycomb or ICS, Android Beam security and more. I’m sure you’ve all seen plenty of this amazing new phone but just in case we have a few videos below for your viewing pleasure. Feel free to hit either of our news portal links below revealing everything about this next flagship device, then enjoy those videos and your Halloween weekend.
[Galaxy Nexus] & [4.0 Ice Cream Sandwich]