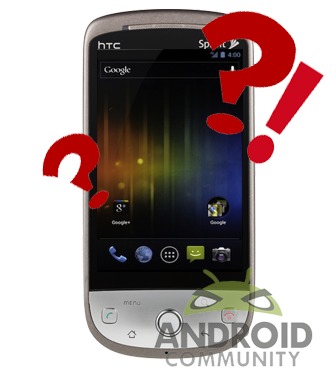 One of the first Android phones available in the US may see an upgrade, unofficially of course, to Android 4.0 (Ice Cream Sandwich). The HTC Hero has always had a great community of developers that stick around to make sure the device isn’t just up to date, but has the latest and greatest despite its crucial hardware limitations. I personally had the HTC Hero for quite a while thanks to an amazing port of CyanogenMod; HTC Sense just wasn’t cutting it with such a slow processor and limited RAM.

I’ve still got the thing in storage, so I may have to whip it out and follow the development thread XDA developer jaybob413 started on November 14th. They seem to be coming along rather smoothly on the port, with one user even reporting working radios; which is of course important if you plan on using the ROM daily. It definitely boots, and touchscreen function is a go. Audio, Google Apps, WiFi, and the Camera are all still under construction.

Even better, it seems both the GSM and CDMA communities of the Hero within XDA are collaborating towards making this a reality. Expect me to show off a quick clip of ICS on it as soon as it’s available to test! It will certainly feel weird rolling back to the rather small screen, but getting a taste of Android 4.0 will be well worth it.