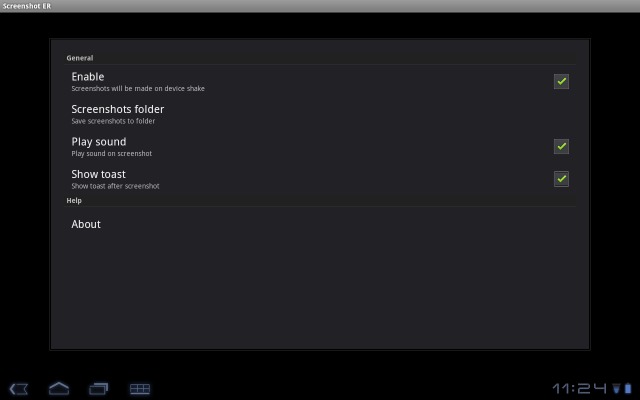 For those that use these kind of apps or have been around lately to notice that we didn’t have one. The Motorola Xoom and any Android 3.0 Honeycomb device in general could not take screenshots with an app. There is drocap2, ShootMe and many other screen capture apps for our Android phones and apparently none of them worked on Android 3.0 but now a developer from the XDA forums named ftgg99 has fixed this issue for us. He has developed an app called Screenshot ER.

Before this Xoom users had to use the Android SDK to take screenshots with an app and you had to be plugged into the computer making it a little difficult to take screenies while gaming for reviews and such, I know because I had to do it. Now all you need is an Android 3.0 device (also works with all earlier android versions) and root access on the device and you are good to go.

The app has many good funtions and settings, sounds for when it captures the screen. You can shake to capture but don’t hurt anyone while swinging a 10″ Xoom tablet around trying to get it to snap a screenshot as that might be bad. That is when the wife will say it’s time to return the toys. The wonderful developer has made this free for everyone, you can get it here or it will always be available at xda at the source below. I’d like to mention there is also a donate version on the Android Market if you feel like donating to the developers of this app.