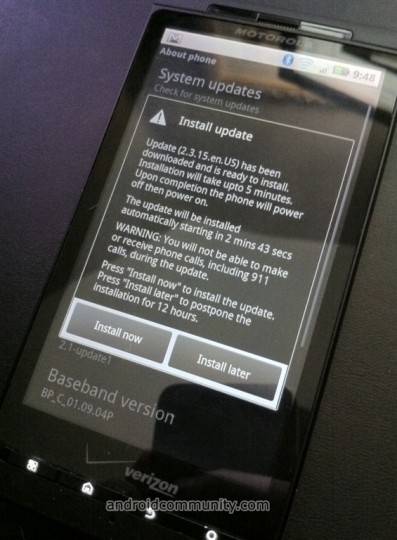 After the highly anticipated release of Android 2.2 updates for Droid X, the update from Android 2.1 to 2.2 has created concerns (and problems) for Motorola forum users. Some of the recently addressed concerns with the new Android OS are random rebooting, WiFi connection and stability issues, battery manager “force close” errors, and media not playing properly.

If you’re experiencing some of these issues and want to know how to resolve them, or you just want to know what kinds of problems users are having with their recent updates, check out the forum statement below. And be sure and look at the last line of the statement, it attempts to steer us away from the recent new Gingerbread update rumors floating around. What do you think?

If you have already upgraded to 2.2 for Droid X, you have found some new capabilities. Unfortunately, some owners also found new issues. Here are some of the known issues raised by forums members, with some information about each. It is not intended to be a complete list at this time — there are many more fixes and improvements in the works. I’ll update this list as information becomes available.

Stuck on Moto logo after reboot – this was tough on a few owners. Very sorry about that. A fix has been developed for this and should eliminate the problem. It will be distributed in a future software release. If you are still experiencing this issue, click here.

Random rebooting – while there always seem to be new conditions that can cause an electronic device to panic, we do have improvements coming that address and eliminate identified panic states. They will be distributed in a future software release.

WiFi connection and stability – improvements in WiFi have been developed, to address several problem areas. They will be distributed in a future software release.

Battery Manager “force close” errors – under some circumstances, pressing the battery icon under Menu > Settings > Battery Manager results in a forced close error. A fix has been developed for this and should eliminate the problem. It will be distributed in a future software release.

Media won’t play – includes “sorry the player does not support this type of audio file,” custom ringtone stop working, video won’t play, etc., until after a reboot. We believe we have identified the cause of these errors. A fix has been developed for this and should eliminate the problem. It will be distributed in a future software release.

Music files cutting off the final four seconds or so – a solution has been developed. It will be distributed in a future software release.

At this time I don’t have information about when the next software update will be available — when I have it, I’ll share it here.