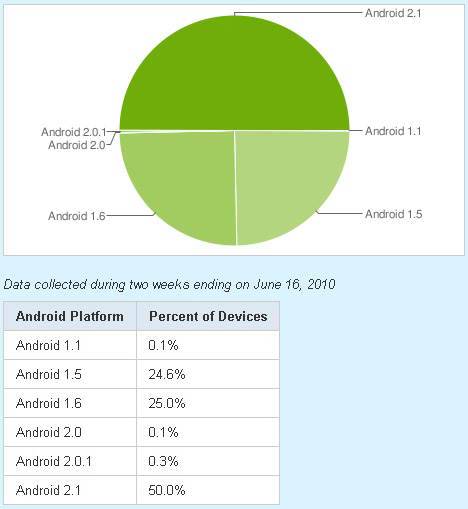 The latest numbers from Google says that Android 2.1 is now on 50% of phones. These figures are obtained by the number of times a certain device visits the Android Market. Oddly enough, there is no mention of android 2.2 on the chart. It’s possible that they are being represented in the sum of 2.1 handsets.

Previously, Android 2.1 only held 45% of these phones. With more and more handsets being updated to 2.1 these figures will begin to look more unified. If you notice from the chart, Android 1.5 and 1.6 basically makes up the rest of the chart. With more updates being pushed out within the next 2 months, 2.1 should overtake roughly 75% of this chart.

The next chart should be very interesting. When it does come out, Android 2.2 should be officially released on the Nexus One and there will be a few phones that are released with Froyo installed. 2.2 might take a huge chunk out this chart if most Sense UI devices are updated like we’ve been hearing in a few rumors.