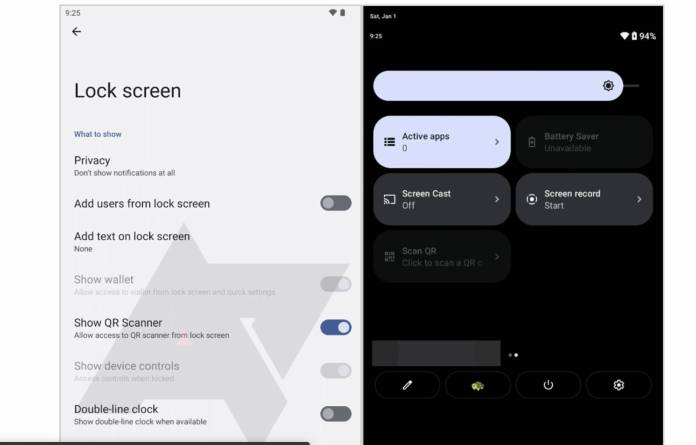 We’re still probably a month away from the first previews of the next major Android update but already we’re getting rumors of what some new features it may bring. Tipsters are saying we’ll finally get an easier way to scan QR codes since we seem to not be able to live without it. Another feature that we may get is a way to easily do a media playback transfer from one device to another. These are of course most likely in development so we might see the features change or maybe not even be included in the preview or final version of Android 12.

XDA Developers reports that Android 13 may make it easier for users to scan QR codes. Sometimes it’s as easy as opening your Android phone’s stock camera app which will automatically scan the QR code. But there are also times when you need to open the Google Lens app or download a third-party app to be able to scan the code. But a report is now saying that Android 13 will now let you scan them from the locked screen.

The screenshots from the tipster shows that the locked screen will have a “show QR scanner” to give users a more intuitive way of scanning the codes. And since QR codes are still very much everywhere from restaurant menus to digital calling cards to marketing and promotional efforts, this should be pretty useful. There should also be an option to turn off the scanner from your locked screen if you don’t find any use for it.

Android Police meanwhile shares a possible “tap to transfer” feature that will come to Android 13. Basically it should be able to let you transfer media or media playback from one device to another. It’s still unclear as to how this will work and it still might be in development. It will supposedly display chip notifications when a user is playing media on their device and then they get close to another device like a phone, tablet, or connected speaker.

It may need to use NFC or UWB for this to work and may also use Google’s casting protocols. Again, it’s still early days so we don’t know exactly how these features will work until we get the Android 13 preview, which may arrive next month.