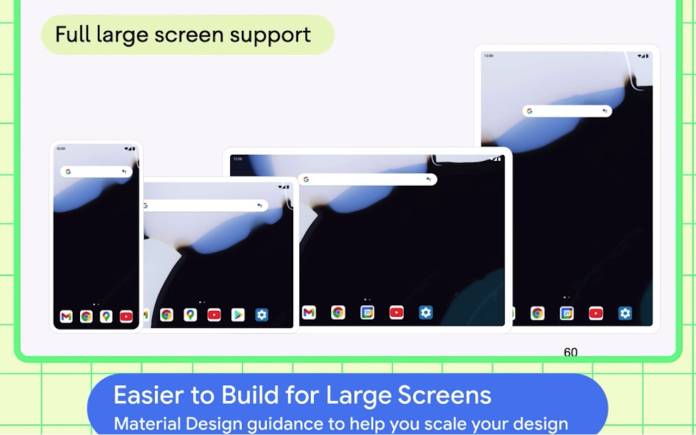 Android 12 brings a number of changes, new features, and improvements to most smartphones and tablets that can support the new version of Android. Android 12L also follows for those devices with larger screens. Last month, the Developer Preview rolled out. More devices are being added to the Android 12L Developer Preview program and we can expect more will be included. There will be subtle changes to tablets and phones next year once Android 12L is implemented.

At the Android Developer Summit, the Android devs presented three things the public need to know about the large screens for Android. There is an upcoming Android 12L feature drop for large screens.

The Android 12L makes Android 12 better on devices with large displays. The UI is more refined even if across different surfaces. You may notice the improved lock screen and notifications.

The next release will show improved multitasking. This includes the ability of all apps to enter the split screen mode. It won’t matter if the app is resizable or not. Compatibility mode has also been improved.

You may also encounter new Activity Embedding APIs. These APIs can allow users to display different activities side by side.

The goal is to make it easier to develop and build large screen layouts in existing apps. Several tools are available like a new Material Design Guidance targeted at large screens, Window Size Classes, and updates to SlidingPaneLayout.

There are new Compose APIs that can allow simple development of adaptive and responsive UI. It may also include Navigation Rail support. Other improvements include Android Studio reference devices, Visual Lint, and a new Resizeable Emulator.

Updates to Google Play has been added as well specifically for Large Screens. The improvements include new checks to assess app quality and large screen specific app ratings.