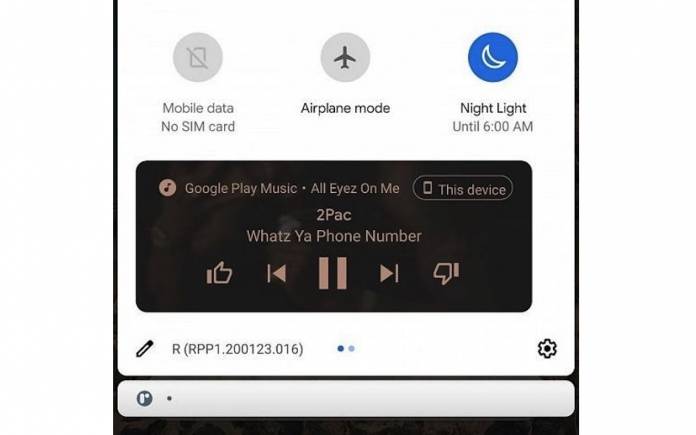 Google released the Android 11 Developer Preview and with it comes several changes and improvements. It’s not the final version yet so expect more updates and detailed information will be revealed. The next Android platform was announced earlier than usual. It’s ready for Pixel devices (Pixel 2 and above) so it’s no surprise some developers already managed to get into the code and review the strings and then share their findings with the Android community. Yesterday, we learned about the Battery Share menu that mentioned something about reverse wireless charging.

The next feature discovered is a music player in the Quick Settings panel. It’s not final yet as the team could only be testing it. Apart from the Android 10 improvements and new security and privacy features, Android 11 will include increased touch sensitivity, a redesigned Notification History page, new screenshot previews, and a Motion Sense gesture for controlling music playback on the device.

The Quick Settings may have a music play in the notification shade. This can be easier compared to it being moved to the bottom. We’re assuming many people have sent similar suggestions and that Google is aware of the issue.

Android R, now Android 11, will have the Quick Settings panel include the music player for convenience so instead of one row, there will be two rows in the panel. Note that this feature is not easily available on the first developer preview. An XDA developer had to enable it manually.

Another change we can expect is on the ‘Notification history’. The notification log will be revamped in Android 11 as sighted by some devs. It will mainly be a redesign as it won’t replace anything. It will be more for the users, allowing them to see significant notification content.