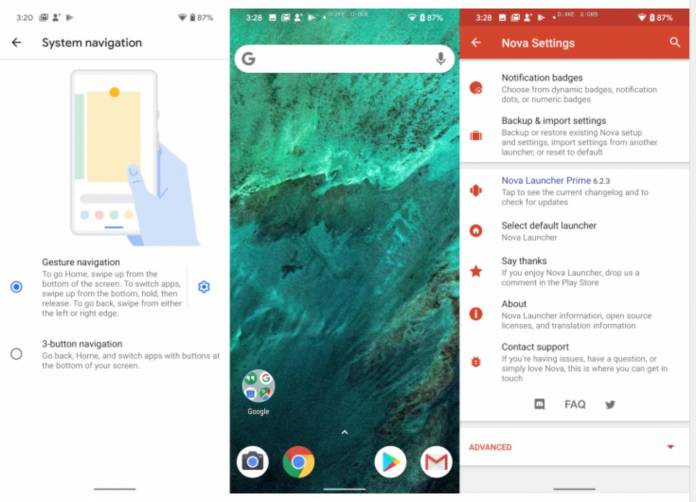 One of the new things that come with the Android 10 has been the gesture navigation system. While it has been pretty divisive among users and tech writers, one of the foremost criticism is that it did not work with third-party launchers like Nova, Action Launcher, etc. Google promised that they would fix this in a future update and now it looks like the fix has been rolling out already, although for now, it’s only for Pixel 4 devices.

In the initial launch of Android 10, if you wanted to turn on the gesture navigation for your 3rd party launchers, you will get an error message that could not be fixed manually. If you wanted to use any of those launchers, you had to stick to the two-button or three-button versions. The creators of such launchers like Nova and Action Launcher said that this was unfair to them as those who wanted to use gesture launchers would have to go back to Google’s default launcher.

According to Android Police, Nova Launcher developer Kevin Barry said that the fact that communities were persistently asking Google to fix this is probably one of the reasons for the quick response. He is hoping that there will be a quick roll out either through Project Mainline or the next security update which users expect every month. However, he has yet to test and use it on his Pixel 4.

Chris Lacy of Action Launcher also said that he hopes device manufacturers will ensure that Android 10 updates will support third-party launchers from the beginning. He’s even already thinking of Android 11 and hoping that Google will offer third party launchers “full feature parity” with the default system launchers.