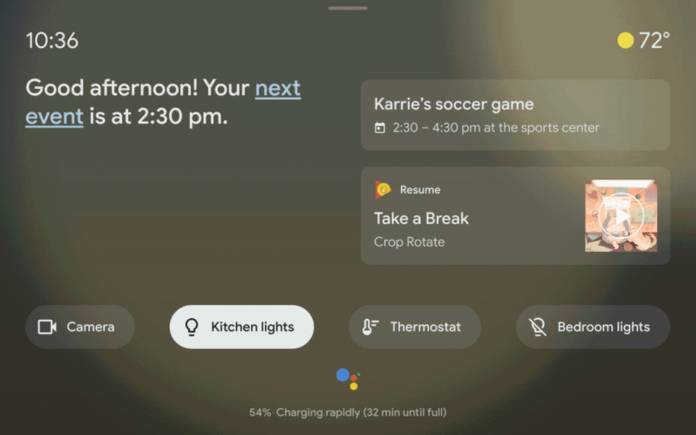 If you have no plans of buying a Google Home Hub or any other smart display device anytime soon, you were probably excited when Google announced the Ambient Mode at the IFA this year. It will supposedly turn your smartphone or tablet into a smart display when it’s charging by showing you some basic things like calendar, weather, notifications, etc. However, at launch, it was only for two tablets and two smartphones. It looks like Google is now rolling it out to more devices and hopefully, everyone will get it eventually.

If it’s the first time you’ve heard of Ambient Mode, it’s a Google Assistant feature that will give you a smart display even if you don’t have an actual smart display. If your phone is charging or your tablet is docked, your screen can become an ambient display showing your calendar schedule for the day, the current weather, your notifications, your reminders, your music controls if you’re playing something, and even your Google Photos so it becomes a digital photo frame.

Now it looks like some users are telling XDA Developers that they are getting the Ambient Mode option on their devices, despite the fact that initially, only the Lenovo Smart Tab M8 HD, the Lenovo Yoga Smart Tab, the Nokia 7.2, and the Nokia 6.2 were the only ones that had it. Now some users of the Xiaomi Redmi K20 Pro, the Nokia 6.1, Nokia 6.1 Plus, POCOPhone F1, and maybe even other devices, are seeing the Ambient Mode.

There’s no official announcement yet from Google if this means that Ambient Mode will officially be available for all Android devices, or at least those running on Android 10. There are some who are seeing it on Android 9 so that may not be the case. Let’s wait and see if we’re all getting this feature soon.