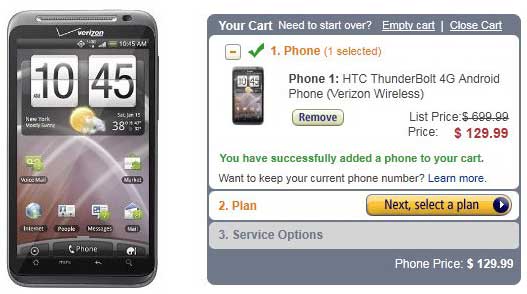 Amazon is joining forces with Verizon to offer $25 to spend in the Amazon App Store for Android with the purchase of a Verizon Android Device. The promotion begins tomorrow and will run all week. The offer is valid only on Verizon phones including the HTC Thunderbolt, which Amazon recently dropped to $129.99 with a two year deal. The promotion will certainly drive traffic to it’s new AppStore but will also give a boost to Amazon’s Wireless portal and the Verizon 4G phone which has been cut in price more than once.

Amazon’s AppStore for Android has been rolling along like gangbusters. And although the eCommerce site hasn’t shared overall download figures yet, the fact that they’ve doubled apps to 7,500 since opening points to a brisk and successful launch. It is also launching several new services to augment it’s Android presence including Cloud Player, Amazon’s MP3 music service. Cloud Player differs from Apple iTunes in that users can store their music and other digital content in the Cloud and access it via streaming like their own personal Pandora.

But Amazon is also meeting some stiff resistance from wireless provider AT&T, which has set a policy to block third party app downloads on Android Devices. That makes it difficult for MaBell Android users to shop anywhere but the Android Market. Could this be considered and AntiTrust move? Nobody has really broached that yet, but AT&T is likely concerned about security in light of recent issues with malware piggybacking on existing apps from the Marketplace. However, with strict pricing models and an approval process similar to Apple’s, Amazon’s position is, they’ve got that covered.

[via All Things Digital]