While Amazon may still be in denial about any plans to put out its own brand of Android-powered smartphones, its actions seem to say otherwise. The online retailer giant has recently been seen making a patent application for an object recognition service that could very well be implemented for a future Amazon smartphone.

It could just be a case of wishful thinking, but numerous rumors have already sprung up about Amazon working on a smartphone equivalent of its popular Kindle tablets, which the company is dismissing as something that could happen but it still outside of its radars. But this new patent application, ambiguously called “User guided object identification”, might be proof that an Amazon smartphone is actually within reach.

Object identification isn’t entirely new. Google even came out with its own Google Goggles app, not to be confused with the Google Glass eyewear, that identifies a brand or item based on a photo taken of the object’s logo or text. Amazon’s patent, however, goes further than that. Whereas current implementation rely on a somewhat flat or easily recognizable pattern, such as a book cover or product label, Amazon’s version is theoretically able to identify the whole 3D object itself. Users will be able to snap photos of a real-world 3D object which the service will be able to correctly identify and bring up a search result, which will most likely be an Amazon store entry. This opens up the service to a wide range of objects such as shoes, bags, tools, and more. The system isn’t perfect yet and sometimes requires users to match a product to a provided outline or manually enter a product category, but it’s an interesting step in that direction. 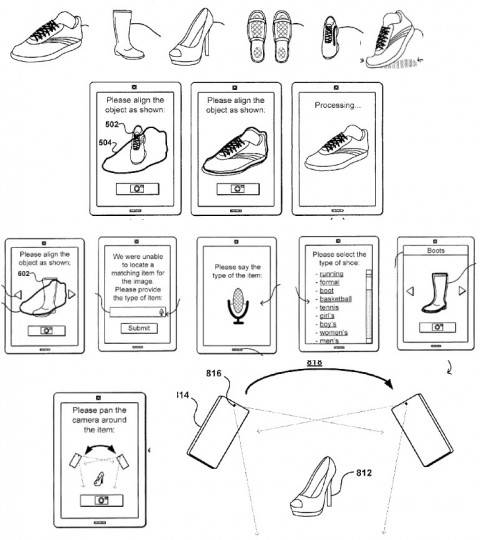 Of course, this 3D object recognition service could very well just be available for Amazon’s current tablets and book readers. However, the patent does mention a smartphone and, given Amazon’s propensity for rolling out its services primarily or initially on its own devices, this could very well be a hint that such a device is on the way.