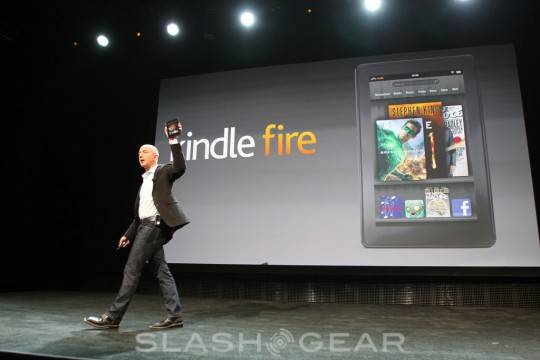 Amazon is set to announce their new Kindle Fire tablet at an event next week set for September 6th. Many of the rumors floating around are regarding a larger 10-inch version, but new details are claiming the fires won’t be getting any bigger. We say fires because CNET is reporting two 7-inch tablets will be unveiled.

According to reports close to the situation Amazon will be announcing and showing off two 7-inch Kindle Fire tablets. One being very similar to last years model. It appears that last years model will be getting a very similar refresh with a new user interface (possibly Android 4.0 Ice Cream Sandwich) with a lower price point, then an improved and more powerful model will also get announced.

The image above, leaked by The Verge shows what we could be expecting and hearing from Amazon soon. That is the same model we already know with a slightly improved UI and software, then behind it is their new and improved model with a front facing camera, video chat capabilities and multiple other new features. Notice the difference in the bezel?

We can’t see Amazon dropping the original all the way down to $149 — but that is certainly a possibility. Then that would leave room for the original to sell, and now popular $199 price point to be met by their new and improved Fire 2 featuring better hardware, cameras, and possibly even a quad-core processor. It’s safe to say Amazon won’t be aiming at the iPad here, and instead will have some tough competition from Google’s own Nexus 7 and the upcoming iPad Mini.

Would you buy a larger Kindle Fire? Or is 7-inches their sweet spot?