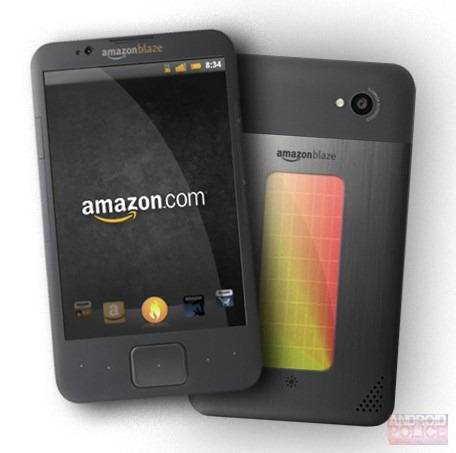 Photos and specs have been leaked on what looks to be Amazon’s entry into the Android smartphone market. The phone is known as the Blaze, and it looks stacked with a 1.2 1.2GHz dual-core Qualcomm MSM8660 processor, 4.3-inch Mirasol display. Other specs include 512MB ram, 32GB of internal storage and a 5MP rear facing camera. The Blaze will also come with a front-facing camera for video chat, and have may also have a near field communications (NFC) chip for electronic point of purchase (ironic considering Amazon is an Internet based eCommerce site).

But what is really noteworthy is that it comes with an embedded solar panel on the back to recharge the battery throughout the day. And harkening back to it’s Kindle roots, the Mirasol display is supposed to be very stingy on battery life. It doesn’t rely on back-lighting like other Smartphones and it’s easy to read in direct sunlight. The Blaze will be powered by Android 2.3 (Gingerbread), have HSPA+ data services, and will also have a custom Amazon Blaze UI which will offer integration of Amazon services and access to user accounts similar to Google’s accounts are on every other Android handset.

And the word is that Amazon has plans to put out regular software updates to address the issue of fragmentation. And by the looks of the advertising graphic below, the Blaze looks to be made available on AT&T and Verizon. No word on pricing just yet, but it looks to launch in early Fall, if at all. There some dispute as to if this is a real device (and we know that Amazon has been recruiting Android engineers) or just an April Fool’s joke. If it is, it’s a pretty elaborate one.