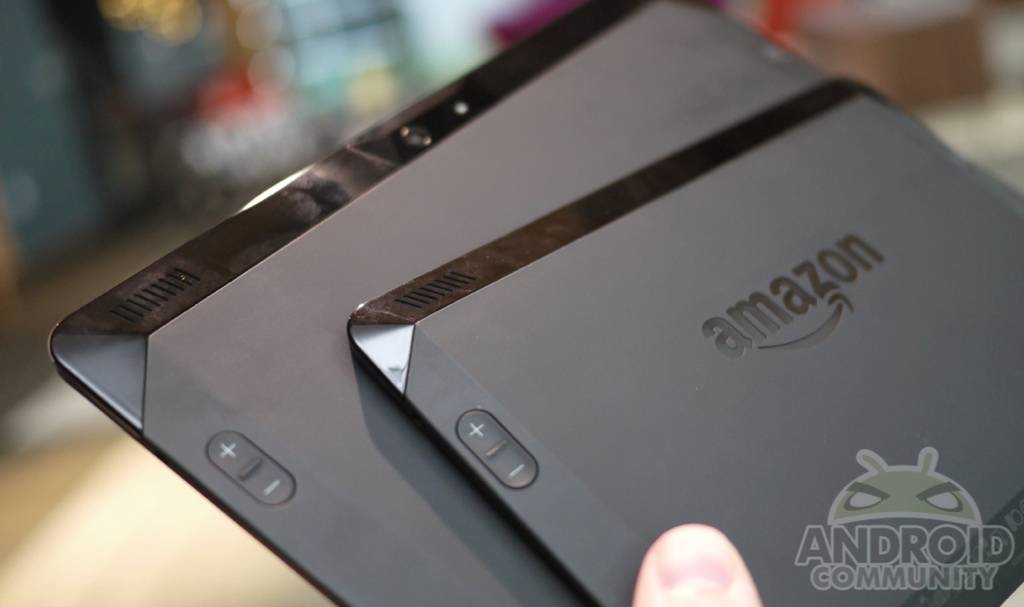 Amazon took the unusual route with the original Kindle Fire, branching out from Android by adopting Google’s OS but changing it in fundamental ways until it served the retail giant’s content funnel purposes. Now in the third-generation we have the Kindle Fire HDX, two new slates – 7- and 8.9-inches – which refine the consumer experience even further. We stopped by Amazon to find out how the new Fire HDX tablets hold up.

The first thing you notice is the step up in build quality. Amazon ditched the separate internal midframe it had used in previous models, and instead switched to a cast magnesium alloy unibody that allows the slates to be not only thinner and lighter, but feel more premium too. The only let-down is the slip of fingerprint-grabbing glossy black plastic, most noticeable on the Kindle Fire HDX 8.9 around its 8-megapixel rear camera assembly.

Otherwise, though, both tablets are sturdy and, if not exactly eye-catching, then at least feel like they could survive a trip in your bag even without the new magnet-toting Origami Cases. These feature clever creases that allow them to prop up the tablets in both portrait and landscape orientation, while the 8.9-inch version also supports popping the Kindle Fire HDX 8.9 up slightly – with a reassuringly solid magnetic click as you do so – to expose the rear camera and automatically boot up the camera app itself.

Qualcomm’s Snapdragon 800 chipset has been wheeled in – with 2GB of RAM and up to 64GB of storage – to keep things running smoothly, and Amazon has reworked pretty much every level of the software stack to drive out the most performance. The graphics pipeline, for instance, has been fettled to make the carousel more responsive, though you can also now swipe up and find an app grid instead.

Given it’s an Amazon tablet, though, the Kindle Fire HDX – and the new Fire OS 3.0 “Mojito” platform it runs – treats apps slightly differently. In fact, software lives alongside individual pieces of content, and the task switcher shows not just the ereader app, say, but individual icons for each ebook you’ve been looking at recently. It makes jumping between different textbooks for the same course more straightforward, even if Amazon’s UI sliding out from the right edge of the screen reminds us more than a little of the Windows 8 dialog.

Like the Nexus 7 2013 – probably the tablet the Kindle Fire HDX will be most readily compared to – the Kindle Fire HDX lacks an HDMI port. Both are capable of Miracast streaming with the right WiFi-equipped display, mirroring what’s on the tablet’s screen on your TV. However, Amazon goes one step further, and unsurprisingly it wheels in the power of the cloud to do it.

Rather than streaming from tablet to TV, the Kindle Fire HDX remotely controls a cloud-based version of the content you’re playing, whether that be a purchase from its video store or a Prime freebie. The Fire HDX acts as a remote control, and you can switch between on-tablet playback and TV playback, with the slate showing “second-screen” content like actor bios and character details – popping up each character on the tablet as they appear on-screen – as well as what music is playing – with the ability to jump straight to a specific track in the movie or TV show, or buy it – and even trivia pulled from IMDB’s extensive crowdsourced archive.

There are a couple of downsides, biggest being compatibility. The system needs a special Amazon app to run, and initially that’ll only be offered on select Samsung Smart TV models, the Xbox 360, and the PlayStation 4. Amazon says other hardware support will come in time, but hasn’t got a roadmap to share, and can’t say when more affordable adapters – like Roku’s set-top box – might be enabled.

Even given that, the system is impressive. There’s so little lag, for the most part, between hitting a control on the tablet and the TV responding, that it’s hard to believe that the cloud is acting as intermediary. Since what’s playing is separate to what’s happening on the Fire HDX, the tablet stays responsive too, whether you’re reading through show details or doing something completely different, like playing games (which look incredible thanks to the high-resolution screen and capable CPU/GPU combo). A cheap Amazon-branded Chromecast equivalent would be the ideal accompaniment, but sadly that doesn’t seem to be on the agenda, at least as far as Amazon is telling us.

Cloud streaming isn’t the only neat touch. If there’s one thing we know, it’s being treated as unofficial tech support by friends and family, so Amazon’s Mayday system has us interested. Effectively taking the retailer’s existing customer care agents and broadening their role from phone to video support, Mayday is triggered with a button in the drop-down control panel on the Fire HDX itself, and instantly opens up a small window for the video chat.

It’s one-way video only – the agent can’t see you in your PJs – but the audio is two-way (the absence of a microphone on the new, $139 Kindle Fire is the main reason it doesn’t get Mayday support) and customer services can not only see your screen but annotate it and take full control if you ask them to. Amazon expects users to ask anything from how to set up child restriction systems for the first time, through requesting a quick refresher course on using a forgotten feature, to more complex tasks like setting up VPN or Exchange connections.

We were skeptical at first, but running through Mayday did leave us impressed at how straightforward the system is. The agent not only helped us with the settings but, when we asked him to take control of the Kindle Fire HDX and set it up himself, talked us through exactly what he was doing and why. Jeff Bezos expects Mayday to be particularly well used on Christmas morning, and we’re inclined to agree with him. 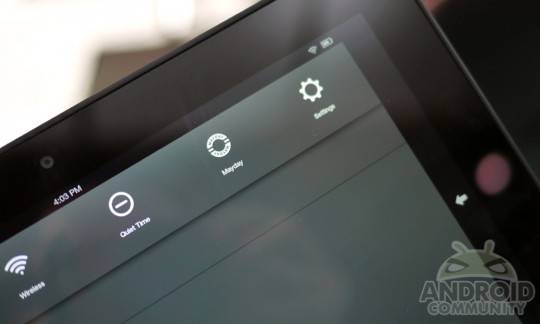 If the first-gen Kindle Fire was about providing a cheap, portable window onto the Amazon ecosystem, and the second-gen models simply refined that experience to better compete with tablets from Google, Apple, and others, the third-gen Kindle Fire HDX finally feel like interesting devices in their own right. From the clever use of light-adaptive display contrast, to keep the panel more visible in direct sunlight without relying on the brute force of cranking up the 400 nit backlight (and saving power in the process), though to free services like Mayday which will legitimately lower the confusion levels of new users, it’s clear there’s been plenty of thought put in.

We’ll hold off on a final judgement until we can review the new Kindle Fire HDX, of course. Pre-orders begin today, with shipments expected to begin from midway through October.