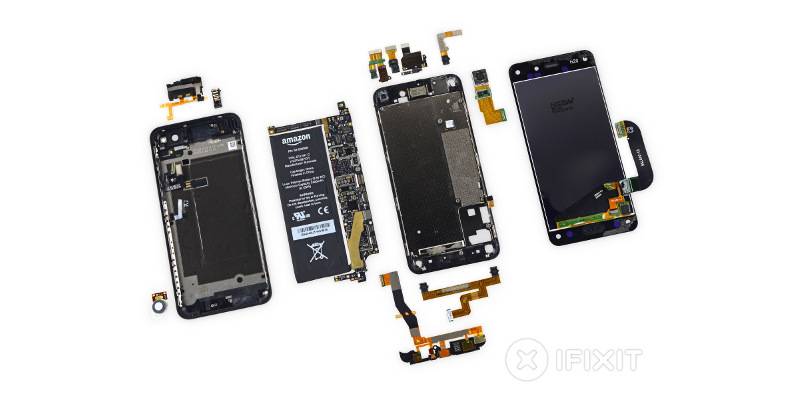 Now that the Fire Phone is officially out, it is, of course, time to give it the iFixit treatment. Amazon‘s much-awaited first ever smartphone is filled to the brim, not with top of the line specs, but with fancy gimmicks and features that keep the device unique, if not entirely interesting. However, it is those features that may actually make it all the more difficult to repair.

At first glance, the Amazon Fire Phone looks deceptively easy to open up since its two halves are only held together surprisingly by non-proprietary Torx T3 screws. Once separated, however, the phone reveals a different story, one that is not exactly impossible to pick apart but unnecessarily tedious. The only thing that connects the two halves, apart from the glue sealant, of course, is the volume rocker cable. The inside back cover of the Fire Phone reveals a tamper-evident sticker that testifies to your ghastly deed. That, however, is the least of the problems when trying to open up the device.

There are two major sore points in this teardown process. The first is that, unlike most smartphone nowadays, the Fire Phone’s components are not modular. Several even share the same cable so that replacing one could pretty much mean replacing others as well. The other problem is the four front-facing cameras that enable the Fire Phone to implement its fancy Dynamic Perspective feature. These cameras are encased in glue to ensure that they won’t accidentally jiggle around because precision is critical. But it also means they are terribly hard to remove. And since they’re glued to the display assembly, getting the latter repaired means either replacing all four cameras too, or some extremely careful transplanting procedure.

It isn’t surprising then that the Amazon Fire Phone gets a 3 on a scale of 1 to 10, 10 being the easiest to repair and 1 being the worst. Then again, this might not exactly be surprising to those that are familiar with how Amazon performs its business. The company very much likes to keep everything under its control, so it will very much prefer that it will be the only one to repair it. Of course, that may never have been in question for most owners anyway, but the repairability index does have one other implication. Even if you get the Fire Phone repaired, it will most likely cost you more than usual.