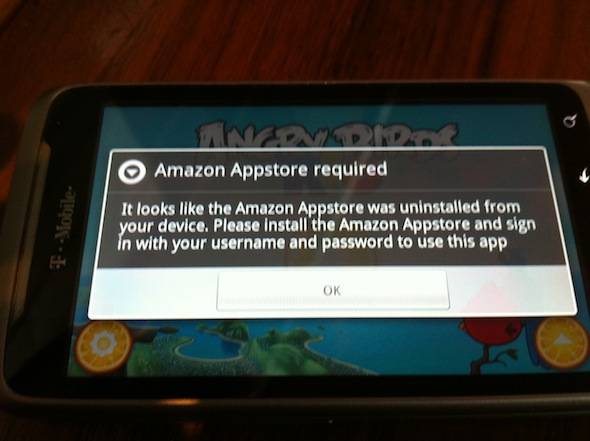 The Amazon Appstore was a pretty bold move. Not only did they walk all over Apple’s trademarked name, they introduced a brand new rival to the Android Market that Google manages. The Amazon Appstore does offer some handy features over the Google Market, including the give away of one free app a day. Turns out it isn’t as free as we thought.

Did you know that if you uninstall the Amazon Appstore apps you downloaded from the store won’t run anymore? Yeah neither did I until yesterday. A developer apparently pointed this out to San Francisco Chronicle yesterday. He noticed that the Amazon Appstore was perpetually running some background services, which he was unable to kill, so he proceeded to uninstall the Appstore, unwittingly losing access to any apps he downloaded from it.

What this means is if you want to keep running those free apps Amazon “gave you,” you have to keep letting them run those background services. Looking over the Amazon Appstore Permissions, you’ll notice that there isn’t much it can’t do. It even counts as a system tool, which is launched when you turn your phone on (that’d be those background services).

We haven’t confirmed what it is exactly the Appstore is doing in the background, but likely possibilities are sending usage data back to Amazon. This also means that Amazon is modifying the APK’s that developers submit to their market, causing them to force close if the Appstore is not installed. We’d assume that this is included in the contract devs sign with Amazon, but its still a little fishy.

Luckily re-downloading the Amazon Appstore isn’t too dificult if you ever uninstall it by accident. What do you think? Android users are no strangers to background data, are you willing to let Amazon camp on your phone for a free app each day?