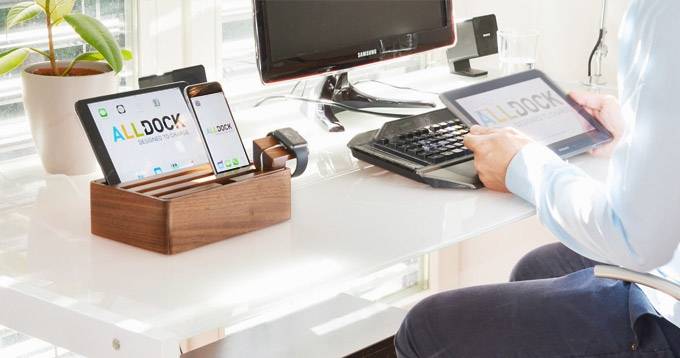 How many gadgets do you have at home? One, two–more than a dozen?! You don’t have to answer this but we’re certain you have a lot. One of the biggest challenges in most homes today is the lack of electrical outlets because there are too many gadgets and home appliances that need charging. And as the smart home technology begins, we know more people would want more outlets, extensions, or at least gadget docks to work as an all-in-one charger.

This new project on Kickstarter could be the answer to your problems. The ALLDOCK is a universal USB charger that can give extra juice to your smartphones, tablets, smartwatches, fitness trackers, and whatever mobile device that needs charging. It’s simply a charging station that’s best for homes or even offices that have numerous gadgets lying around and need some charging.

The ALLDOCK eliminates cable mess in the room because you can find them in just one place. It’s a USB charger so it’s compatible with the latest gadgets from the most popular brands in gadget town like Samsung, Apple, BlackBerry, LG, HTC, Motorola, and Huawei. What’s good about this thing is that it can quickly charge your gadgets–up to 80% in less than an hour. Even if you’ve all used up the slots, its charging power won’t be reduced.

Design-wise, the ALLDOCK boasts a simple, clean, and streamline style that will remain in style for a long time. It’s made of 100% natural bamboo and walnut so it’s durable than ever. This isn’t the first docking station from the startup but they’re one of the few who can deliver high-quality gadget docks that don’t diminish charging speeds.

Check out ALLDOCK 2015 on Kickstarter.