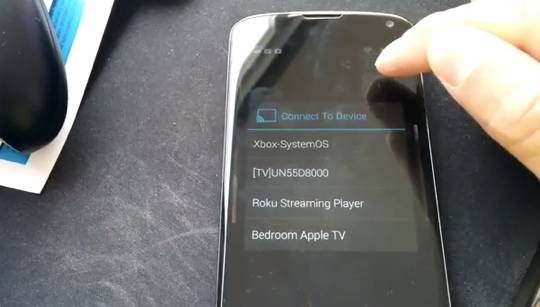 Koush has returned with another beta release for AllCast. This latest brings things up to beta 7 and once again, this has arrived with a short teaser video. The basics for the app, AllCast will allow the user to stream/send locally stored videos to a number of devices.

According to details fro Koush, and as you will seen shown in the video sitting below, AllCast will stream to the Roku, Apple TV and Xbox (both the 360 and One) as well as Samsung Smart TVs and other DLNA devices. While there is some similarity between how this and the Chromecast works, there is an essential difference between the two apps.

AllCast will allow the user to stream local videos, whereas those using the Chromecast will be able to steam video from Netflix and Hulu Plus (as well as a few others that Google has allowed). Anyway, those looking to do a bit of streaming and a bit of beta testing at the same time will be able to grab the app using the via link at the bottom of this post.

One word of warning though, AllCast beta 7 will be up and running for just a short time. Koush pointed out this will will “self destruct” on December 1st. The other distinction worth pointing out is that AllCast will stream video only, so make sure to avoid clicking on any images you have sitting in the Gallery app on your smartphone or tablet.