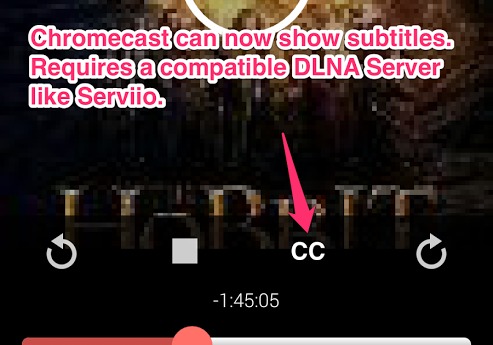 Koushik “Koush” Dutta has just pushed an update to his AllCast app that brings a variety of features and fixes. In particular, the app has several new features for the Chromecast, including the ability to display subtitles.

Koush explains why this subtitle feature is somewhat of a big thing. Other streaming platforms supported by AllCast require subtitles to be embedded into the video. They may allow subtitles to exist externally but require the source device to do the transcoding itself. Chromecast, on the other hand, is a computing platform by itself and can handle external subtitles on its own. Subtitle support on AllCast requires that a media server that can handle subtitles or that the subtitles exist in the same location as the video file and with the same name.

The playback interface has also been modified a bit when it comes to seeking. For one, the seek position will now be displayed when scrubbing the seek bar, which should help give users more precise feedback. On devices like the Roku that do not support seeking, however, the seekbar is hidden. Instead, Roku can fast forward and rewind and the interface is adjusted to reflect that capability.

The AllCast update also has some other tidbits, like support for Dropbox browsing and changing the color of the Chromecast letterbox, that blank area around the video when it doesn’t take up all of the screen, from gray to black. AllCast has been updated on Google Play Store and, as in the past, is availble in both free and paid versions.