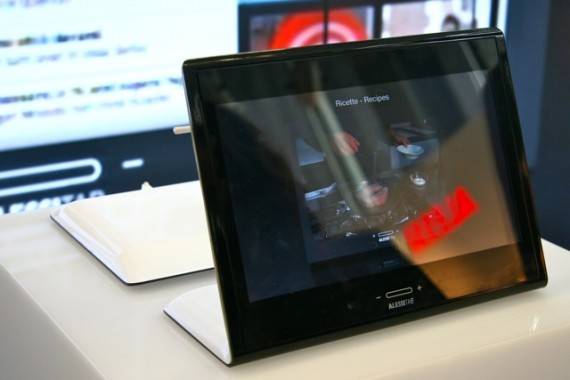 Design firm Alessi have turned their hand to electronics with the new Android-based AlessiTAB, a touchscreen home media tablet.  Shown off at an Italian design fair recently and spotted by InfoServi.it, the tablet packs WiFi and a digital TV tuner, together with internet access and digital photo frame functionality.

Users will also be able to access social networking sites, such as Facebook and Twitter, and the AlessiTAB has an integrated battery good for around 6hrs of use.  As for recharging, a base station is supplied onto which the AlessiTAB sits, triangular in cross-section.

Alessi expect the tablet – which is made by Promelit and designed by Stefano Giovannoni – to go on sale in Europe in September 2010.  Pricing is said to be around €300 ($403), making it less than an iPad.