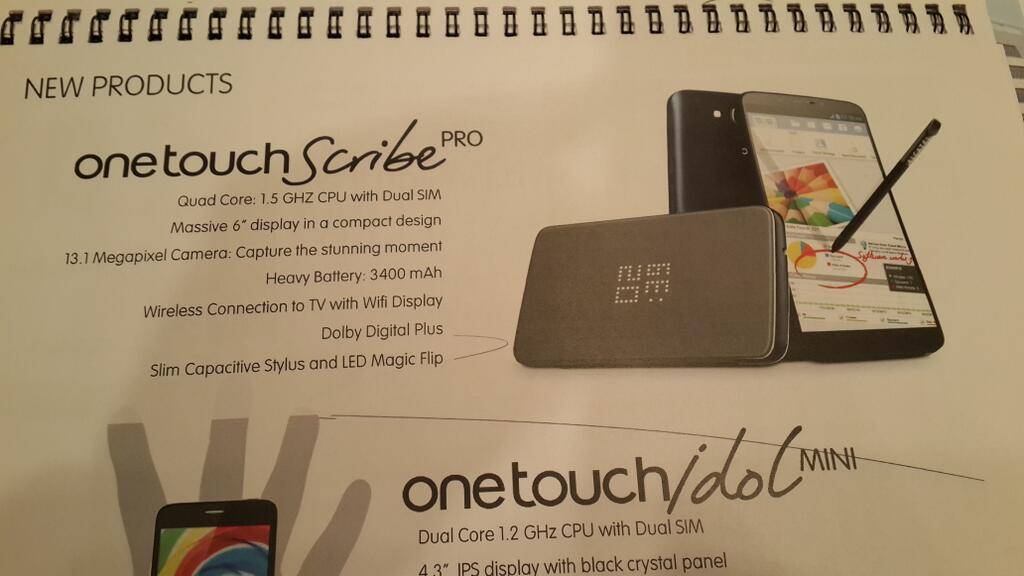 Alcatel might ring a bell for some but it’s not a name one would immediately associate with Android smartphones in the US. Still, it has managed to make its presence known this year with a few of its smartphones from its One Touch line. It seems that the company is getting ready to unveil yet another device that takes on a note-taking flavor.

This isn’t the first stylus-oriented smartphone that Alcatel has announced. At CES, Alcatel introduced the One Touch Scribe X and One Touch Scribe HD-LTE. Fast forward a few months, we haven’t heard any new details aside from what we got back then. As the name suggests, the 5-inch Scribe phablets, unlike other One Touch phones, were advertised for creating notes or sketches with a stylus accessory that doesn’t look too different from the regular fat ones you’d buy for other capacitive screens.

Alcatel is apparently upgrading the Scribe as seen in a photo courtesy of leak source Eldar Murtazin. The One Touch Scribe Pro bumps up the processor to an unnamed quad-core running at 1.5 GHz. It will also have dual SIM slots, but there is no mention of LTE support. It will also sport a 13.1 megapixel camera as well as Dolby Digital Plus audio. The stylus has also been tweaked to a slimmer form that looks something like an S Pen.

Eldar says that this 6-inch device will launch sometime later this month with a price tag of $300. It seems it will be launched in Hong Kong but there is no word if it will come to international markets, too.